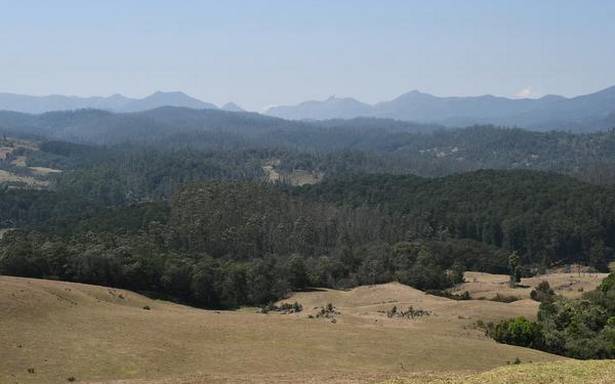 Over a hundred hectares of the last remaining grasslands in the upper Nilgiris, in Wenlock Downs, is being slowly eroded by encroachments by the Shola-grasslands’ former adivasi protectors — the Todas and Kotas.

According to Forest Department officials, over a 100 hectares of the total expanse of 1,500 hectares of land designated as “forest lands” in the Udhagai North Range, have been encroached upon by the Todas and Kotas, many of whom have leased their lands to non-tribals in exchange for a small fee.

Explaining the importance of protecting the area, N. Mohanraj, a Nilgiris-based conservationist said, “The Wenlock Downs Reserve Forest is a crucial wildlife corridor, which allows wildlife from the Sigur plateau to make their way up to the upper Nilgiris. The landscape is also one of the last remaining patches of Shola and grasslands in the entire Nilgiris other than Mukurthi National Park.”

Forest Department officials told The Hindu that a majority of the lands that have been encroached were formerly lands to which the Todas had grazing rights to, or Toda patta lands, where the Todas were allowed to cultivate small landholdings with the express permission of the district administration. However, since the early 2000s, the adivasis have stopped applying for permissions and are cultivating without proper approvals. Most of the encroachments have occurred near Tenth Mile, Samiyarmattam and Pudumund areas, officials added.

“In the last 20-years, the Todas and the Kotas have started claiming that all these lands are ancestral lands, and that they have the right to cultivate crops here. They have put up fences and destroyed much of the grassland in the area, as their earlier pattern of land-usage, from being pastoralists grazing the land, has changed and they have become settled agriculturalists,” said a conservationist from the Nilgiris.

One of the Todas, who has been cultivating crops in his small landholding of around two acres over the last five years in Wenlock Downs, said that most adivasis feel that it is unfair that they are being targeted by the Forest Department. “It is not just the Todas and the Kotas who are cultivating. Violations are being carried out across the district, from illegal buildings to illegal tree-felling. When there is little being done to stop construction and farming elsewhere, why should the adivasis alone be held accountable when our farming activities are considerably lesser?” he wondered.

Siddhartha Krishnan, convenor of the ATREE (Ashoka Trust for Research in Ecology and the Environment) Academy for Conservation Science and Sustainable Studies, who has studied the history of the Wenlock Downs Reserve Forest since the early 20th century, when it was administered by the British, and following Independence, said that the Wenlock Downs reserve forest has changed dramatically from being a Shola-grassland mosaic to one populated primarily by woody, thorny and invasive species of flora.

“The issue is extremely complex, as sub-leasing of the lands has been going on since colonial times. Moreover, government policy in the past too has encouraged the Todas to take up settled agriculture, while plantations of eucalyptus, wattle and pine taken up by the forest department in the past has destroyed much of the grasslands, some of which were in the designated Toda patta lands,” said Mr. Krishnan.

While making it clear he wasn’t condoning the damage that was being caused to the landscape, Mr. Krishnan said that there needed to be cooperation between the Forest Department and the adivasis to come up with a comprehensive landscape management plan.

“Grasslands are always vulnerable in policy discourse as being designated as wastelands. There is also the question of the Forest Rights Act in this area, as to whether it would supersede the rights acknowledged under the Toda patta lands, or whether it offers additional protection,” he said, adding that targeted restoration projects could be conducted, while ensuring that cultivation does not spread further.

When contacted, District Forest Officer, Nilgiris division, Guru Swamy Dabbala, said that the Wenlock Downs Reserve Forest requires immediate protection. “The problem is that the adivasis encroach on a small portion of forest one year, and the next they lease it to outsiders and move on to another portion of the grassland or forest. This will inevitably lead to more problematic human-animal interactions not just in Wenlock Downs but in other areas as well,” he said.

Mr. Mohanraj said that the landscape was ideal to promote eco-tourism as an alternative to destructive agricultural practices. “This is the only Shola-grassland landscape that is easily accessible to the public, and if the local community can be involved in promoting eco-tourism, they will make much more money than what they receive from leasing the land to outsiders,” he said.

N. Sadiq Ali, founder of the Wildlife and Nature Conservation Trust, said that efforts should be taken to immediately identify the non-tribals who are cultivating in the area. “Their illegal farms should be immediately returned to the forest department so that they can be restored,” he said.