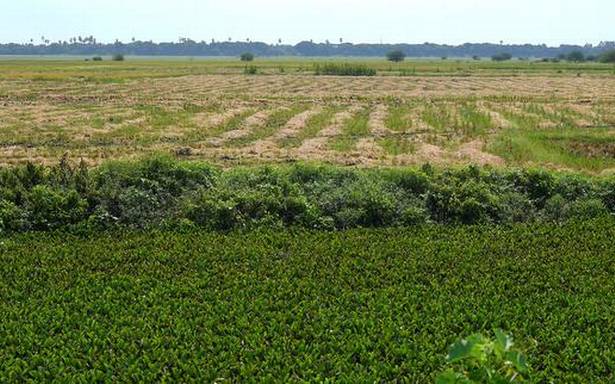 The second largest freshwater lake in Puducherry has been subject to rampant encroachments, illegal fishing and agricultural activities

Bahour Lake, the second largest freshwater lake in Puducherry, which was once a sprawling waterbody and the main source of irrigation, is dying a slow death.

The lake has been drying up at an alarming rate thanks to a mix of anthropogenic factors, including rampant encroachments, illegal fishing and farming activities, say activists.

The lake is said to be have been in existence even before the reign of the Cholas, during which the lake bed was deepened. The waterbody is fed by the Bangaru Vaikal, a feeding channel which branches off at Sornavur Anaicut on Thenpennaiar river about 16.8 km from the lake. It has a seive to let out excess water and a portion of the tank, including the bund, lies in the neighbouring Cuddalore district of Tamil Nadu.

Legend has it that on hearing that famine was prevalent in those days in the area, Bangari, a dancer in the area, constructed the canal at her expense while her sister Singari bore the expenses to raise the bunds. In the 1970s, the lake served an ayacut of 1,740 hectares (1,664 hectares in Puducherry and 76 hectares in Tamil Nadu). Now, the tank has hit dead storage.

A large part of the lake’s 1,756 acres has turned into grassland due to uncontrolled encroachments and farming activities. Its maximum depth has declined from 3.60 m a few decades ago to 0.10 m because of human intervention.

According to V. Chandrasekhar, president of the Bangaru Vaikal Neerathara Kootamaippu, “The lake has now almost dried up due to inadequate maintenance of feeder channels. The lake has not been properly desilted since 1980. Water hyacinth has spread on the northern parts of the canal while villagers have been diverting water to irrigate their fields on the lake. The entry point of the canal joining the lake has been encroached at several places.”

He alleged that the Revenue Department had issued pattas inside the water spread area of the lake. As many as 136 persons were using the water spread area for farming, raising single and multi-harvest crops. This unbridled rise in encroachments by the patta holders posed a serious threat to the lake. The patta holders were illegally diverting water through the Nathamedu channel to increase their cropping pattern, resulting in serious damage to the sluices and weirs of the tank, he said.

“Though the government inaugurated a project to strengthen the bunds near the Aranganur sluice last year, no action has been taken to repair the sluice gates. A sum of ₹1.27 crore allotted by the government for the construction of a bridge over the surplus weir also remains unutilised. The rampant encroachments have already resulted in the lake losing its identity and illegal fishing has only compounded the problem,” says Vivekanandan, a farmer of Karaimedu.

The auctioning of fishing rights in the lake was stopped around seven years ago. But a section of locals have been indulging in illegal fishing by damaging the sluices and violating the ban order. Though repeated representations have been made to authorities concerned, it has failed to evoke any response, say farmers.