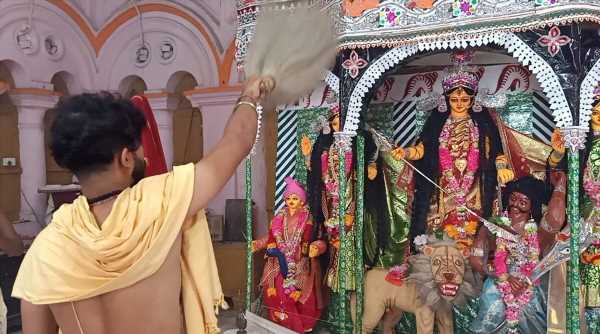 Tripura’s royal history researcher Pannalal Roy says, Maharani Sulokkhona Devi, wife of Maharaj Krishna Kishore Manikya, who had his capital at Rangamati, now Udaipur — was frightened and had fainted after watching the 10-armed Durga idol during the arati. 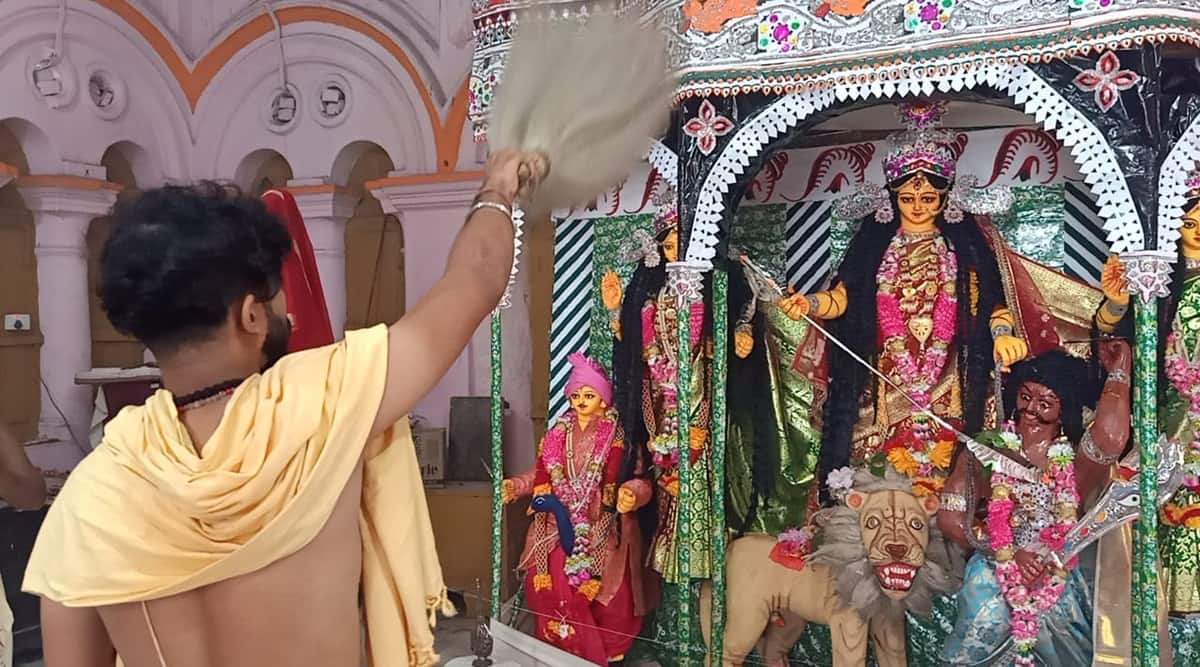 While goddess Durga is usually seen in her ‘Dashabhuja’ (ten-armed) form, the idol at Agartala’s Durga Bari has only two visible hands while the rest of them are hidden behind. According to myths, the unique form of Durga was as a result of a divine command.

While most Durga Puja organisers have mellowed down their theme-based pandals this year due to the ongoing Covid-19 pandemic, the 183-year-old puja at Durga Bari, erstwhile temple of Tripura’s Manikya monarchs, is seeing a lot of devotees this year.

Tripura’s royal history researcher Pannalal Roy says, Maharani Sulokkhona Devi, wife of Maharaj Krishna Kishore Manikya, who had his capital at Rangamati, now Udaipur – 50 mm south of Agartala — was frightened and had fainted after watching the 10-armed Durga idol during the arati. Later, the queen received a divine command where the goddess said she would appear in two arms and the rest eight would be hidden in the back, thus maintaining her mythical ‘Dashabhuja’ or ten-armed form while ridding the queen of her fear.

Speaking to indianexpress.com, Durga Bari temple’s head priest Jayanta Bhattacharya said, “The Durga idol we worship here is one of its type. Our ancestors have been worshipping Maa Durga at the royal palace of Udaipur earlier and then at Old Agartala Palace. Since the temple was shifted here 137 years ago, the goddess is being worshipped here.”

As per Tripura’s Merger Agreement with the Government of India on October 15, 1949, regular rituals and activities at Durga Bari Temple, Tripurasundari Temple at Udaipur in Gomato district and a few other temples were taken over by the state government to be funded and maintained. As per the agreement, West Tripura District Magistrate is the de facto “sevayat” of the Durga Bari Puja rituals and the DM of Gomati district is the “sevayat” of the Tripurasundari Temple. Both temples have historical and mythological significance, dating back 137 years and over 500 years, respectively.

While buffalo sacrifice was customary at Durga Bari, it was halted three years back due to an order of the High Court of Tripura against ritualistic animal sacrifice. The court later permitted some sacrificial rituals. However, Durga Bari Temple is yet to resume the practice.

As per tradition, the temple is renovated, cleaned and painted as per requirement before every Durga Puja. This year was no exception. The spacious naat-mandir, where devotees usually sit and watch the rituals, is thronged by devotees on all puja days till now. According to tradition, the idol of Durga Bari temple would be the first to be immersed on Vijaya Dashami at Dashamighat, a popular immersion ghat on River Howrah here.

As per government records, Durga Puja is being organised at 2,176 pandals and locations in different parts of Tripura, including 865 in urban areas and 1,311 in rural location. The puja is being celebrated in 554 pandals in Agartala city alone this year.