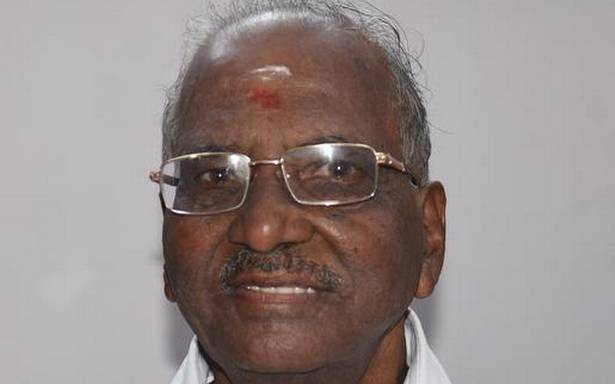 Mr. Madhusudhanan, 80, a well known face of the party in north Chennai, died in the city on Thursday after a brief illness

The chairperson of the AIADMK presidium, and former Minister, E. Madhusudhanan, 80, died in Chennai on Thursday after a brief illness. He was hospitalised last month. His wife, Jeeva, predeceased him in April this year.

A long-standing, well known face of the party in north Chennai, Mr. Madhusudhanan passed the Secondary School Leaving Certificate (SSLC) examination in 1956. It was then that M.G. Ramachandran, who founded the AIADMK in 1972 and became Chief Minister five years later, was emerging as one of the leading stars of Tamil cinema. Mr. Madhusudhanan became one of his ardent fans and identified himself as a follower of MGR. He also took an interest in matters concerning labour welfare.

After the establishment of the AIADMK, Mr. Madhusudhanan became convener of the party in north Chennai. He was made the Chennai district secretary in 1987. When the AIADMK captured power for the first time in 1977, he became a member of the Board of Directors of the Tamil Nadu Slum Clearance Board and held the post for seven years.

In March 1984, he was elected to the Legislative Council and remained a member of the Upper House till its abolition in November 1986. Five years later, when the AIADMK captured power under the leadership of Jayalalithaa, Mr. Madhusudhanan was elected from the R. K. Nagar constituency and was initially appointed Handlooms Minister. He was later given the portfolios of Animal Husbandry and Food.

After the DMK regime assumed office in May 1996, a case was filed against him in connection with the purchase of dhotis and sarees, meant for free distribution for the Pongal festival in 1992, with three firms violating existing procedures. In April 2000, a Special Court convicted him in the case and sentenced him to two years of rigorous imprisonment with a fine of ₹20,000. Nine years later, the Madras High Court set aside his conviction.

In February 2007, he was elected chairperson of the party’s presidium and went on to hold the post for perhaps the longest period.

Within days of the death of incumbent Chief Minister Jayalalithaa in December 2016, he was one among those who demanded that V.K. Sasikala, who had been the former Chief Minister’s aide, take over the affairs of the party as general secretary. Two months later, when the then Chief Minister O. Panneerselvam quit the post and launched a “dharma yudham” against Ms. Sasikala, Mr. Madhusudananan switched over to his camp.

In March 2017, he, along with Mr. Panneerselvam and former legislator, S. Semmalai, petitioned the Election Commission, challenging the election of Ms. Sasikala as [interim] general secretary of the party. This led to the freezing of the party symbol, “two leaves,” for eight months, before the Commission deciding to allot it to the group led by Mr. Madhusudhanan, who had, by then, along with Mr. Panneerselvam and others, merged the faction along with that of Edappadi K. Palaniswami.

When the by-election to the R. K. Nagar constituency was held in December 2017, he was fielded as the AIADMK nominee but lost to T.T.V. Dhinakaran by a margin of about 40,000 votes, an uncommon sight of a candidate fielded by the party in power to lose in a by-election. Later, he blamed former Fisheries Minister, D. Jayakumar, who represented Royapuram (of north Chennai) in the Assembly, for his defeat, but Mr. Palaniswami and Mr. Panneerselvam did not take any action against Mr Jayakumar.

In a statement, Mr. Panneerselvam, coordinator, and Mr. Palaniswami, co-coordinator, recalled that Mr Madhusudhanan, even in the 1950s, ran the MGR fans’ clubs in north Chennai and organised night schools for the benefit of children in the area.