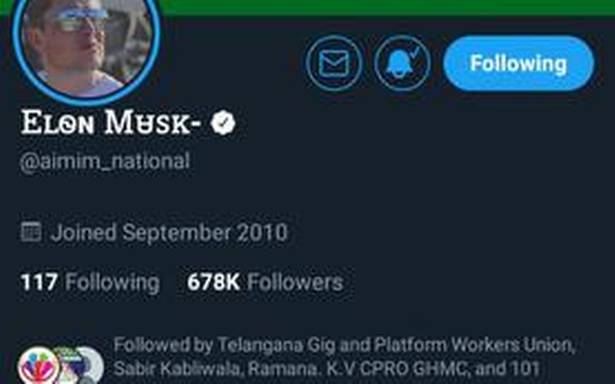 This was followed by tweets about memes connected to cryptocurrency.

The All India Majlis-e-Ittehadul Muslimeen’s verified Twitter was hacked on Sunday.

Party sources said that hackers targeted the @aimim_national handle, which frequently tweets activities of party leaders, including party president Asaduddin Owaisi. The profile picture was purportedly changed to that of Tesla co-founder Elon Musk. The display name too was changed to ‘Ꭼꮮꮻɴ Ꮇꮜꮪꮶ’.

Sources said that the account was hacked earlier on Sunday afternoon. After the purported hacking, the handle tweeted several memes connected to cryptocurrency.

In a separate development, AIMIM’s Uttar Pradesh State president Shaukat Ali’s Twitter handle was temporarily restricted. The reason provided on the timeline for the move was that there was ‘unusual activity’ witnessed from the account.

While Mr. Ali remained unavailable for comment, party sources in Hyderabad said that this is not the first time the party’s verified handle was targeted. “At the moment our team has reached out to Twitter informing it of what has happened. We are making efforts to get back the account access,” the source said.

The hacking comes at a time when the party announced its intention of contesting the upcoming Uttar Pradesh Assembly elections. Earlier this month, Hyderabad parliamentarian Asaduddin Owaisi made trips to Uttar Pradesh to address the public.