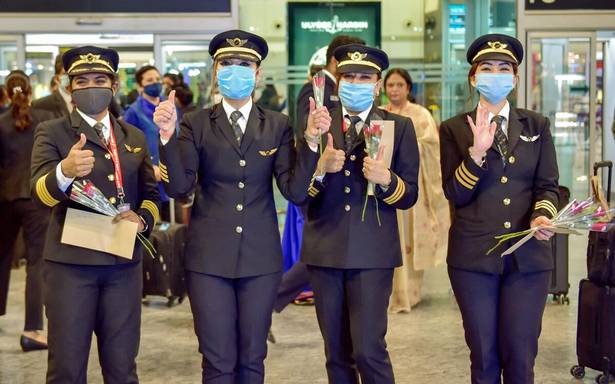 An Air India flight from San Francisco to Bengaluru with an all-women cockpit crew made a successful landing at Kempegowda International Airport here on Monday.

It was the first ever non-stop service between two destinations.

Speaking to The Hindu, Capt Papagari Thanmai said, “It was an amazing experience. We are very thankful for the opportunity given. A lot planning and preparation had gone prior to starting the journey.  We have got warmest of welcome right from we began at San Francisco and after landing at Bengaluru. Passengers were very happy. It was going to be over the pole and it was a direct flight to Bengaluru, which they were looking forward to for a long time. Having a direct flight in the time pandemic is safe for passengers and also it saves a lot time as there are no stop over.”

The direct distance between Bengaluru and San Francisco is 13,993 km approx. and the cities are diametrically at opposite ends of the world with a time zone change of approx.13.5 hours.