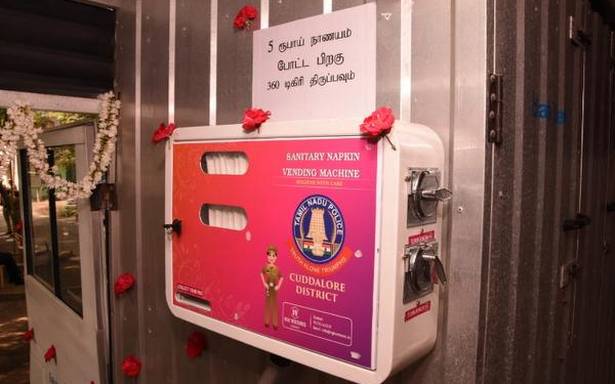 The initiative, aimed at ensuring easy availability of pads for women police personnel, is said to be the first of its kind in TN

In an initiative said to be the first of its kind in the State, the district police have installed sanitary pad vending machines for police personnel at 59 places across the district.

“The move is a part of the Cuddalore district police’s welfare initiatives for its personnel and is aimed at ensuring sensitivity towards the women officers within the force,” Superintendent of Police M. Sree Abhinav said.

The project was inaugurated with the installation of a sanitary pad vending machine at the District Police office in Cuddalore on Tuesday. Mr. Abhinav said that as many as 59 machines sponsored by the Sanmar group were installed at the DPO, Armed Reserve, 46 police stations, six All Women Police stations and four Traffic police stations across the district. The facility has also been installed in a mobile toilet for women cops.

A pad can be obtained by depositing ₹5 in the machine.

According to a police official, women police personnel, especially those in constabulary ranks are also deployed for Law and Order and bandobust duties during the visit of VIPs. They faced difficulties in procuring pads while on duty. Now, the facility has been installed in all police stations to ensure a conducive work environment for them, he said.