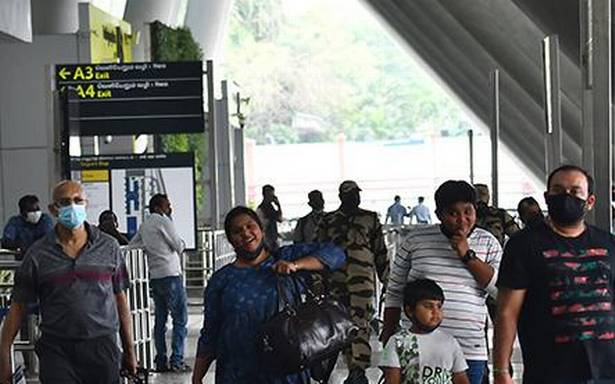 10% of passengers from not-at-risk countries will be tested

Following the increasing number of the Omicron variant cases of the novel coronavirus that causes COVID-19, Tamil Nadu has decided to enforce home quarantine from Sunday for all those coming from foreign countries, irrespective of whether they are classified as at-risk or not-at-risk nations.

Addressing journalists on Saturday, Minister for Health and Family Welfare Ma. Subramanian said passengers arriving from any country to Tamil Nadu would have to undergo home quarantine for one week. “Thereafter, they can take an RT-PCR test. If it returns negative, they can venture out.”

The decision was made as Omicron infections were observed in almost similar numbers from both at-risk or not-at-risk nations. Tamil Nadu has so far been performing RT-PCR tests on all passengers coming from at -risk countries, while only 2% of the passengers from other countries were tested.

Until now, only those arriving from at-risk countries were asked to undergo home quarantine. “We requested the Union government to issue guidelines to extend this to all countries. However, we have not received any response yet. Hence, to contain the spread of Omicron infections, we have decided to implement this from tomorrow [Sunday].” He said 10% of those coming from not-at-risk countries would be put through RT-PCR tests.

Details of passengers from abroad will be shared with the Police and Revenue and Municipal Administration Departments for effective monitoring of home quarantine.

Mr. Subramanian said that while the State had 22 active Omicron cases, the number might go up because more samples with the S-gene dropout (an indication of the variant) had been sent to the National Institute of Virology in Pune. These included 39 samples of COVID-19 patients who were identified through an extensive contact-tracing following an outbreak at Rajiv Gandhi Government General Hospital. He said 3,038 people were traced and tested after a few doctors, nurses and other staff members tested positive. They were the primary contacts of a diabetic patient who tested positive before undergoing surgery at the hospital.

Of all those tested, 54 persons were positive. Among them, 39 samples that were found to have the S-gene dropout have been sent to the NIV. He added that all those who tested positive remained largely asymptomatic.

The Minister appealed to all hotels to avoid New Year gatherings and parties in view of the threat from the new variant. He insisted that it was not an order but a kind appeal. He also appealed to members of the public to stay indoors and celebrate New Year with their families.

He stressed the need for adhering to COVID-19 appropriate behaviour and avoiding gatherings during the Pongal celebrations in January. He said the government would ask the Booksellers and Publishers Association of South India to enforce testing of temperature and personal distancing during the Chennai Book Fair scheduled for next month.