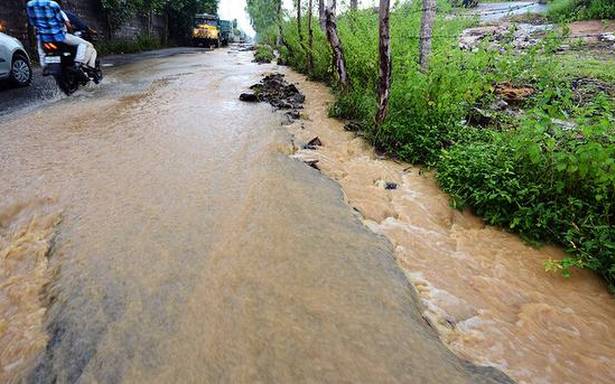 On several stretches, the drains are not provided with the retaining wall

Storm water drains continue to gobble up lives of citizens, which has become quite a common occurrence in city especially when it rains heavy. Yet, safety measures against such deaths do not appear to take priority in the list of infrastructural development works planned for the city.

The latest such fatality is a 54-year-old man who fell into the open storm water drain near Qutbullahpur, whose body is yet to be traced five days after his disappearance.

The incident in Manikonda on the same day, where a techie stepped directly into a drain assuming that there was road, is another case in point, though the drain concerned is not an open one.

Action has been taken against officials responsible for the open manhole on the drain in Manikonda.

Open drains without retaining walls, as in the Qutbullahpur incident, pose even graver danger for walkers, while the blame cannot be pinned on any official.

“During heavy rains, it is common for the nala to overflow on the road. It becomes difficult to distinguish between road and nala space unless one is familiar with the terrain. Officials do close the culvert for vehicles during such times, but pedestrians keep crossing over,” says Khaja Mohiuddin, a shopkeeper in Uppal.

The drain in question is lined by the back portions of built houses for most of its course, only to be broken by roads built over culverts. Danger just lurks by for pedestrians as the narrow road portion becomes one with the drain when it overflows. A retaining wall, or a chain linked mesh built over the nala could help, Mr.Mohiuddin feels. There are several such stretches in city, where fatal mishaps could be prevented through construction of retaining walls.

As per the information available with the Greater Hyderabad Municipal Corporation (GHMC), the stretches of major open drains over two meters in width without retaining walls or security mesh are close to 40 kilometres in length.

“When the drain is less than two metres in width, safety measures may include laying slabs or covers and constructing box or pipe drains wherever the drain is open. But when the width is over two metres, retaining wall or chain linked mesh is the only option to prevent accidents,” shared an official.

Chain linked mesh, however, can only be a temporary solution, as evidenced in the case of the Qutbullahpur incident. The mesh, though existing, was rusted, and partially broken, leading to the fatality.