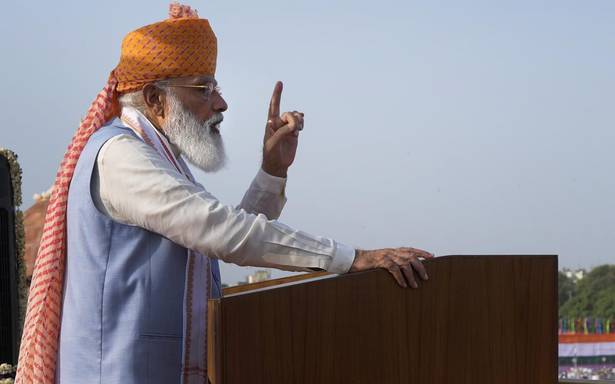 In his speech from the ramparts of Red Fort on Sunday, Prime Minister Narendra Modi announced a ₹100 lakh crore “Gati Shakti” infrastructure plan with great fanfare. He made no mention of the fact that the same scheme has turned up in his last two Independence Day speeches as well.

In fact, several initiatives announced on Sunday seem to be a rehash of previously launched schemes, some as old as two years ago.

“In the near future, we are going to launch the National Master Plan of Prime Minister ‘Gati Shakti’ which will be a huge scheme and fulfill the dreams of crores of countrymen,” Mr. Modi said on Sunday. “This scheme of more than 100 lakh crores rupees will result in new employment opportunities for lakhs of youth. Gati Shakti will be a National Infrastructure Master Plan for our country which will lay the foundation of holistic Infrastructure and will lead to an integrated and holistic pathway to our economy.”

Back in 2019, similar words issued from the ramparts of Red Fort: “We have decided to invest 100 lakh crore rupees for modern infrastructure in this time period. This will generate employment; will develop new systems and various aspirations will be met.”

In 2020, Mr. Modi had reiterated the same plan, offering more details: “The National Infrastructure Pipeline Project will play an important role in this endeavour. ₹110 lakh crore will be spent on this project. For this, about seven thousand projects have been identified in different sectors. This will also give a new direction and a fresh momentum to the overall infrastructure development of the country.”

“I am announcing the National Hydrogen Mission today with this tricolour as a witness,” the Prime Minister said on Sunday. However, Finance Minister Nirmala Sitharaman had announced this mission during her Budget speech in February.

The plan to fortify rice with iron and vitamins before distributing it in ration shops and at schools for the mid-day meal scheme was also announced by then Food Minister Ram Vilas Paswan in 2019, and a pilot project has been in progress for over a year now.

Although the Vande Bharat trains are not new, the decision to start 75 such new trains within 75 weeks is a fresh goal. The resolution to make India energy independent before the 100th anniversary of Independence and move towards a gas based economy also puts a deadline on a long-time ambition.

Previous Independence Day speeches from Mr. Modi have included grander ambitions. The schemes to electrify all villages, end open defecation through Swachh Bharat, provide taps in all rural households through Jal Jeevan, put a human in space by 2022, double farmers income by 2022 and double the economy to $5 trillion over a five year period were all announced from Red Fort during previous August 15 speeches, apart from the ₹100 lakh crore infrastructure plan that has now turned up in three separate speeches.

“It has been two years since August 15, 2019. At least, the 100 lakh crore figure could have been changed,” said a tweet in Hindi from Congress chief spokesperson Randeep Surjewala, leading the Opposition critique of the speech.

“He announces new schemes but these are never implemented or seen on the ground. He says a lot of things but never adheres to them. And now, by bringing the three new farm laws, he has spelled doom for the farmers,” said Mallikarjun Kharge, Leader of the Opposition in the Rajya Sabha.