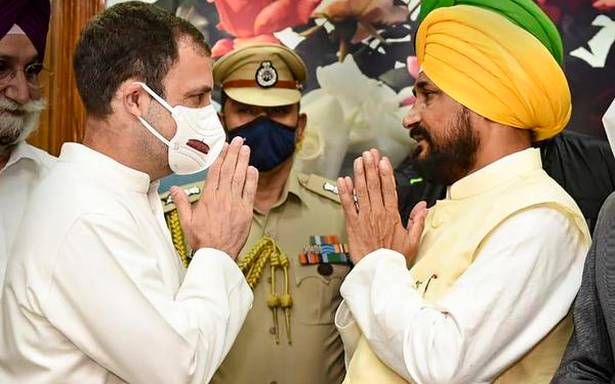 As SCs in the State are not a homogenous bloc, the party may only retain its traditional SC vote bank

Ahead of the 2022 Assembly election, the Congress party has attempted an electoral strike by selecting a Scheduled Caste (SC) Sikh Chief Minister, Charanjit Singh Channi, in Punjab, which has the highest percentage of SC population among the States, at close to 32%. However, the impact of this decision on the party’s electoral prospects is unlikely to be a game changer.

In Punjab, the SC community has traditionally been the Congress party’s vote bank, apart from Hindu voters and Jat (farmers) Sikhs. The SAD is a ‘Panthic’ party of the Sikhs and also garners support from Jat Sikhs voters. In the 2017 Assembly election in the Doaba region, which is largely SC dominated, the Congress party won as many as 15 seats of the 23, which is indicative of the Congress’s hold in the SC belt. So, garnering more support may not be an easy task although the party is likely to retain its vote bank following Mr. Channi’s elevation.

All the major political parties in Punjab have been trying to win over the SC vote in the run up to the Assembly elections. The Shiromani Akali Dal (SAD) has announced that it will appoint an SC Deputy Chief Minister, if voted to power. The Bharatiya Janata Party’s (BJP) leaders have been talking about choosing an SC for the post of Chief Minister. But the ruling Congress has already taken the lead in appointing an SC Chief Minister.

Mr. Channi, as the first SC to head the government in the State, has been socially welcomed and admired by the community, but that this will politically benefit the Congress with a huge mandate may be a far-fetched conclusion as the SCs in Punjab, with sharp divisions within, are not a homogenous group who vote en bloc for any one political party.

Punjab is also the birthplace of the Bahujan Samaj Party (BSP) founded by the late Kanshi Ram. The BSP’s steady decline in Punjab supports the view that SCs in Punjab hardly ever vote as one bloc. The BSP used SCs as a political plank for the first time in 1992 but since then, the party’s fortunes in the State have declined. In 1992, it secured over 16% votes, winning nine seats in Punjab, but this dropped to around 4% votes in the 2012 Assembly polls. In 2017, its vote share percentage hit a further low of 1.5%.

Moreover, the impression among the SCs that Mr. Channi’s appointment is only a stop gap arrangement against the backdrop of the party’s Punjab in-charge Harish Rawat’s remark that the Congress would contest the Punjab Assembly polls under Navjot Singh Sidhu’s leadership has only added to uncertainty in the community. Although the All-Indian Congress Committee later announced that both Mr. Channi and Mr. Sidhu will be the faces of the party in the State, Mr. Rawat’s remark is likely to be exploited by the Congress’ opponents over the course of electoral canvassing.

There are 39 SCs in the State, which are further divided into at least 64 ‘dera’ sects, segregated into different faiths and religions. Most of the deras are politically aligned, and being immensely influential among their followers, they play a significant role during the elections in swaying votes.

“I don’t think the Congress has played the SC card purposely. The move, in fact, seems to be borne out of compulsion. Firstly, Ambika Soni declined the offer of the Chief Minister’s post, then the party couldn’t arrive at a consensus on Sunil Jakhar and Sukhjinder Randhawa. Channi’s name was not even in the contention. His name came up for discussion only after the party ran out of its primary options. Having said that, there’s no doubt that the decision has socially been accepted in the community, who are enthused, but I have my reservations over whether the SC votes will be transferred entirely to the Congress. Nonetheless, with this decision, the Congress is likely to keep its existing vote bank intact, which otherwise could have split on account of the anti-incumbency factor the government is facing. The decision will benefit the party but it’s not going to be something huge that will single-handedly impact the election results,” said Des Raj Kali, well-known Punjabi novelist and political analyst, whose work focuses on the Ghadar movement, SC issues, and the literature and culture of Punjab.

“The impression that, if voted to power, the Congress will have a Jat Sikh in the shape of Navjot Singh Sidhu as its next Chief Minister, is already playing at the back of mind in the SC community. Channi’s selection seems merely a stop gap arrangement,” he said.