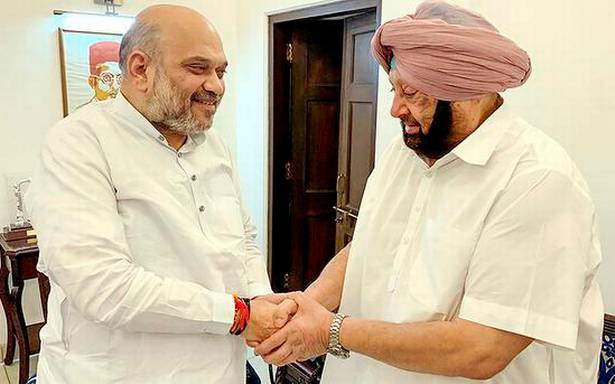 Capt. Amarinder Singh’s proposal for a new party and a possible alliance with the BJP poses challenge to Congress

With former Punjab Chief Minister Amarinder Singh announcing that he is set to float his own party and declaring that he is open to an alliance with the Bharatiya Janta Party (BJP), the 2022 Assembly election in the State is likely to see new political dynamics.

The ruling Congress, which is still grappling to put its house in order under its new state chief Navjot Singh Sidhu, could face a tough challenge, even as it seems to be a win-win situation for Capt. Amarinder Singh (retd.) and the BJP.

The key to success for Capt. Singh’s proposed new party and the possible alliance would be an early resolution of ongoing farmers’ agitation against the Centre’s farm laws. The BJP’s “nationalist” narrative blends well with the personality of Capt. Singh, who has been vocal on the threats posed by neighbouring Pakistan. Also, he has been hitting out at Mr. Sidhu, accusing him of connections with Pakistan and dubbing him “anti-national”.

For the BJP, which has over the years remained a ‘junior partner’ in alliance with the Shiromani Akali Dal (SAD) in Punjab, the new alliance could give a much-needed boost. Although some analysts say that Capt. Singh’s popularity has taken a beating in his recent stint as the Chief Minister owing to his “inaccessibility” to people and even his own leaders, the 79-year-old former Chief Minister is seen as an active leader capable of putting up a strong electoral fight.

Capt. Singh has been viewed as a secular and moderate leader and, in Punjab, Hindu voters have been traditionally been inclined towards the Congress. But with if he joins hands with the BJP, voters could shift, eventually harming the Congress’ prospects.

Some political observers believe that Capt. Singh still has his loyalists in the Congress and that there are several disgruntled leaders in the party who could join hands with him.

“Capt. Amarinder’s announcement of a new party and possible alliance is a win-win for both him and the BJP. Capt. Amarinder had to forge an alliance with the BJP as the campaign needs finance and vote mobilisers. On the other hand, the BJP would get a leader who has a statewide support base and also a secular image. He can bring together the alienated elements within the Congress and also the Akali Dal. He can raise the issue of national security, Pakistan factor, which gels with the BJP agenda,” said Ashutosh Kumar, professor with the political science department of Panjab University.

“Definitely Capt. Amarinder can harm the Congress. The question is would the new Chief Minister Charanjit Singh Channi be able to swing the Dalit vote en masse, which at least for now looks a difficult task,” Mr. Kumar added.