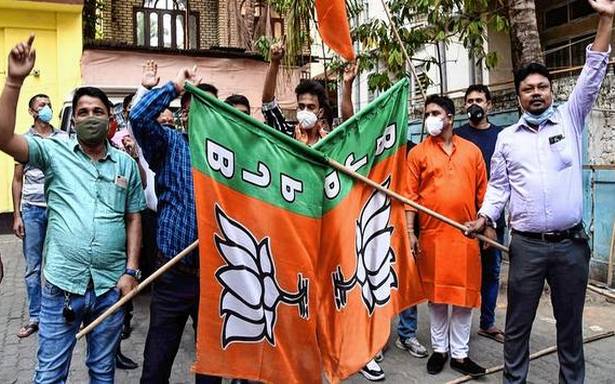 The eastern region of Assam helped the BJP and its allies clinch Mandate 2021, although they bagged 11 seats fewer than in 2016.

Of the 47 seats in the first phase of polling, the BJP and Asom Gana Parishad (AGP) bagged 37 seats, two more than five years ago. These seats covered six Lok Sabha constituencies straddling eastern, northern and parts of central Assam.

The seat count of the Congress and its allies in these constituencies decreased from 12 to nine while Akhil Gogoi, the jailed president of Raijor Dal won the Sibsagar seat.

Poll analysts have attributed the outcome in the first phase seats to three factors: overestimation of anti-Citizenship (Amendment) Act sentiments by the Congress-led Mahajot, its failure to break the sop-driven stranglehold of the BJP on tea plantation workers who swung results in at least 40 of these seats, and the BJP’s ability to sell the fear of Maulana Badruddin Ajmal as the “future of Assam”.

People across Assam’s Brahmaputra Valley have been touchy about the issue of “illegal immigrants” and the perception that “Bangladeshis” would take over the State someday. Apart from the development plank, the BJP’s campaign was based on targeting and criticising the Congress for tying up with Mr. Ajmal’s All India United Democratic Front (AIUDF) to eventually drive the indigenous people out of their own land.

The BJP had replaced the Bodoland People’s Front (BPF), one of its regional allies in 2016, with the United People’s Party Liberal (UPPL) as an ally this time. If the 12 seats won by the BPF across the Bodoland Territorial Council (BTC) are excluded, the BJP-plus bagged one seat fewer than the 24 out of the 39 seats where voting was held in the second phase. The saffron camp equalled its 2016 tally of 15 seats out of the 40 that went to the polls in the third and final phase.

Prime Minister Narendra Modi had during his campaigns had said the Bengali-dominated Barak Valley has a special place for the BJP. The reason: this region of southern Assam had yielded the party nine of the 10 seats in 1991 to give BJP a toehold in Assam.

Bengalis of Assam — in the Assamese-dominated Brahmaputra Valley too — have since been considered mostly to be BJP supporters.

But the BJP’s seat count in Barak Valley came down from eight in 2016 to six this time with the Congress-AIUDF combine bagging the remaining nine seats. More than the perceived pro-CAA mood in this region, the BJP is said to have suffered because of the selection of candidates; some seasoned leaders with Rashtriya Swayamsevak Sangh background were ignored this time.

In seats in the third-phase, the BJP-AGP were virtually unscathed by the combined force of Congress and AIUDF. The BJP-AGP lost a few seats but gained a few to maintain the balance.

Mandate 2021 also saw the BJP get a foothold in the BTC areas by winning two of the 12 seats, becoming the first mainstream party to do so in two decades. Its ally UPPL won six and the BPF, which went with the Mahajot, had to be satisfied with four. The BPF had won all 12 in 2016.