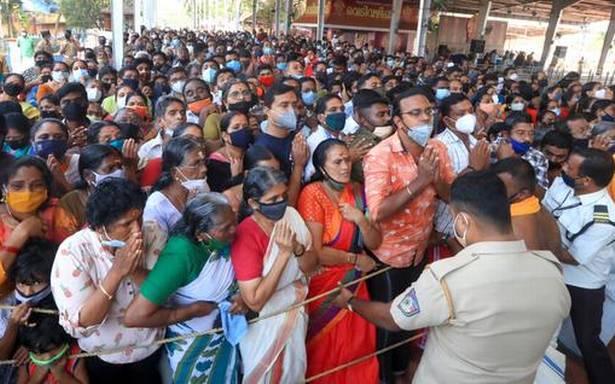 The 10-day annual festival at the Attukal Bhagavathy temple got off to a start here on Friday with the Kaapukettu ceremony. A good number of devotees had reached the temple to witness the ceremony and offer prayers.

The temple trust had made arrangements for offering prayers in strict compliance with COVID-19 protocols, a statement said.

This year though, no hearths will be lit on the temple premises, nearby roads, or public spaces. Devotees can offer Pongala in hearths in their own homes. There will be no ‘nivedyam’ either for them.

‘Kuruthi tharpanam’ on February 28 night will bring the curtain down on this year’s festival. Kuthiyottam is a major ritual of the festival. The Kuthiyottam ‘vrutham’ begins on the third of the Kaapukettu. However, the ritual will be a limited affair owing to the pandemic situation this year.

Thalappoli, a major attraction of Pongala day, will be limited to girls between the ages of 10 and 12 this year. In a departure from the usual ‘purathu ezhunelippu’ ceremony on the ninth night of the festival after the Pongala, this year there will be no ‘niraparaedukkal,’ ‘thatta nivedyam’ or ‘pushpabhishekam.’

This year, emphasis will be on temple arts that will be performed on two stages. The cultural programmes also kicked off on Friday.

The Attukal Amba Puraskaram was presented to actor Nedumudi Venu on the occasion.