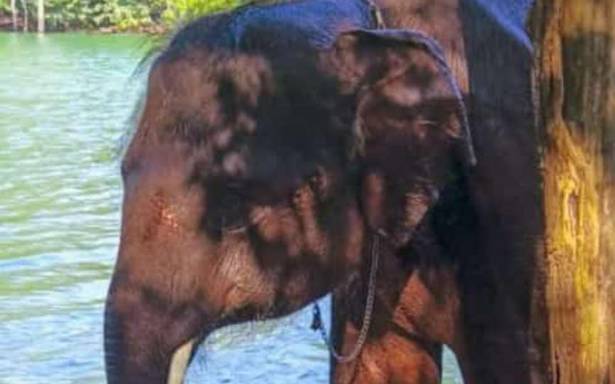 It was only a week ago that another calf, Sreekutty, had succumbed to infection caused by herpes virus. While two other calves had then been diagnosed with the disease, one more has begun to display symptoms.

The symptomatic female calf Podichi has been quarantined at the facility. Kannan, whose health had deteriorated during the last few days shortly after testing positive for herpes virus, has shown slight improvement. However, he is not yet out of danger. The health condition of the other infected calf, Amena, aged one-and-a-half years old, has remained stable thus far, Thiruvananthapuram Wildlife Warden J.R. Ani said.

T. Rajeev, assistant director of the Kudappanakunnu Multidisciplinary Veterinary Hospital, who is part of a four-member team constituted to monitor the outbreak and treat the infected animals, said Arjun’s health worsened rapidly within a few hours after showing no symptoms during the last few days.

The infected animals have shown lesions and cyanosis on their tongues, which was an indicator of the low levels of oxygen in the Central arterial blood. All of the surviving nine elephant calves aged less than 10 years have been kept on medication which essentially involved administering the anti-viral drug acyclovir along with anti-inflammatory drugs for pain relief.