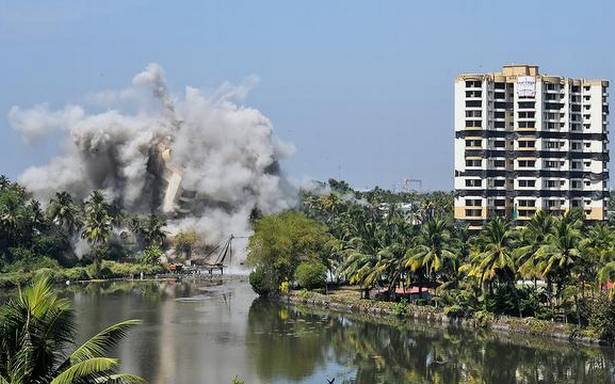 The demolition of apartments in Maradu has significantly impacted the water quality and aquatic life of the Vembanad lake, though for a short period, as huge quantities of debris were dumped into the waterbody, according to a scientific analysis.

According to the recently published research paper, ‘Citizen science tools reveal changes in estuarine water quality following demolition of buildings’, the water had turned alkaline after “debris from the first Alfa Serene Tower, weighing around 76,000 tonnes, was made to fall into the backwaters during the second phase of the blast to protect the nearby buildings from physical and structural damage and other associated causalities”.

High pH value was recorded in the water samples collected from the area, which indicated stress on living organisms. The pH value, which remained high for around five weeks after the demolition, came down significantly, thus saving the lake ecosystem, said Nandini Menon, the lead author of the paper and a senior scientist of Nansen Environmental Research Centre India, Kochi.

Turbidity was also found to be high during the study, which was conducted as part of a citizen science project by involving educational and research institutions and the public.

Comparison with pre-demolition conditions in the previous year (2019) showed that the relative changes in dissolved oxygen, water clarity, and pH were very high in 2020, clearly depicting the impact of demolition waste on the water quality of the lake.

Significant decrease in dissolved oxygen and increase in turbidity was also recorded during the study period. The impact of demolition waste on the Vembanad lake water quality was found to be relatively short-lived, with water clarity, colour, and dissolved oxygen returning to levels typical of that period of year within four to five weeks, noted the researchers.

The dust and dirt from demolition and eroded soils had disturbed the delicate balance of the aquatic ecosystem by reducing water clarity, decreasing the penetration of sunlight into the water, and reducing dissolved oxygen. The visibility in water was very low during the first few weeks and it took five weeks for it to become clear. Water appeared brown during the two weeks after demolition due to a high load of suspended particles in the water column, the paper noted.

Though tides, freshwater influx, and circulation can help to flush out pollutants from lake waters, heavier particles that sank to the bottom can cause leachates into the water column for a longer duration, altering pH, dissolved oxygen, and even salinity of the water, the paper warned.