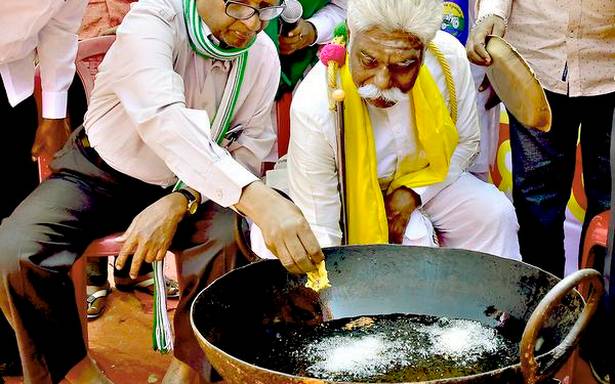 Chandrashekhar Patil, known by his pen name “Champa”, was perhaps best known for his acerbic wit and employment of irony, both in his creative writing and public discourse in which he remained a key voice in the State for over half a century.

One of the founders of the “Bandaya” literary movement — a strand that took radical stances in both literary form and view of society —, he mostly employed his wit as an act of rebellion against sources of authority, remaining irreverent till the end.

“Champa’s wit had a whole range, from parody, satire to carnivalisation, comparable to that of Oscar Wilde and G.K. Chesterton. He often carried no malice and used his wit to puncture the ego of authority, be it personalities or institutions,” observes senior critic Rajendra Chenni, his student.

A writer with a very keen sense of the political, he was the only Kannada writer to be arrested during the Emergency. Champa’s memoir of his 26-day stay in prison, the poems he wrote in jail, and a parody of Indira Gandhi, Jagadambeya Beedinataka, are critically acclaimed.

A trenchant critique of “brahminism” and “divisive communalism”, he was a Lohiate like many writers of his generation and was known for his progressive stances. He returned the Pampa Award, the highest literary honour of the State, in protest against the assassination of his close friend and scholar M.M. Kalburgi in 2015. He was also on the hit list of the killers of Kalburgi and Gauri Lankesh, police investigation later revealed. The Government provided him round-the-clock security since 2017. “I feel guilty of putting the lives of the youngsters who have been deployed to protect me in danger for my own safety,” he often lamented.

What also set Champa apart from other Kannada writers was how he wore Kannada activism on his sleeve. He was one of the key leaders of the Gokak agitation in the early 1980s — arguing for making Kannada the mandatory first language in school education across the State — and played a key role in bringing Dr. Rajkumar to the agitation giving it a fillip. His poem Kannada Kannada, Barri Namma Sangada (Kannada, Kannada, Come with us) reverberated throughout the movement. He remained a proponent of Kannada medium education and was one of the rare writers who could say all his children and grandchildren also studied in the Kannada medium.

In later years, he became the chairman of the Kannada Development Authority and president of the Kannada Sahitya Parishat, which did not go down well with many of his associates. “We disagreed with some of his positions. We saw him as an eternal rebel and couldn’t easily accept him becoming part of the system. But he maintained his autonomy there too,” said Mr. Chenni.

Another senior writer from the Bandaya movement, Baragur Ramachandrappa, said Champa upheld the cultural autonomy of the institutions he headed. “In 2006, when BJP Ministers objected to Ms. Gauri Lankesh and Kalkuli Vithal Hegde speaking at the Sahitya Sammelana in Shivamogga, as the parishat president, he stood his ground. I think this is a very important event that upheld the autonomy of the parishat and the literary world,” he observed.

A proponent of a regional party for the State, he contested as an Independent from Chamarajapet in the 2008 Assembly polls as part of a coalition of Kannada activists and secured only 232 votes. He also had his dalliance with the Karnataka Janata Paksha led by B.S. Yediyurappa in 2013, another decision that surprised many of his old associates. He argued the State needed a regional party, which he advocated in his 2017 presidential address at the 83rd Sahitya Sammelana in Mysuru.