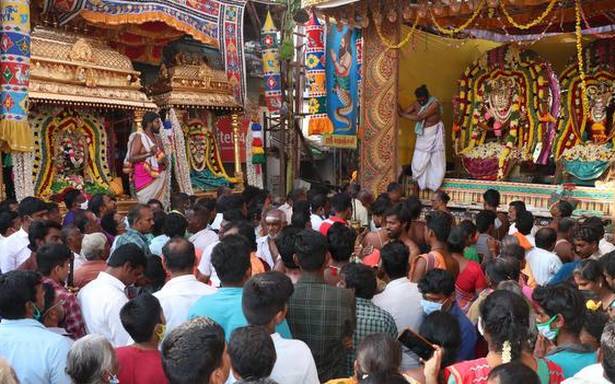 The Arudhra festival was celebrated with religious fervour and gaiety at Saivaite temples in Thanjavur district on Monday.

Special anointment ceremony of panchaloka idols of Lord Nataraja and Goddess Sivagamasundari, along with Tamil saint Manickavachagar, preceded Arudhra darshan of Lord Nataraja in the early hours of Monday as per the religious custom and practice at Aadhi Kumbeswarar temple and other Shiva temples in Kumbakonam.

In Thanjavur, the idol of Lord Nataraja and Goddess Sivagamasundari at Sri Brahadeeswarar temple (the Big Temple) were anointed with milk, curd, sandal paste, cooked rice and other substances on Sunday night. They were decorated and taken in a procession within the temple precincts.

Meanwhile, the celebrtion of Arudhra festival without the procession of Lord Nataraja outside the temple and restriction on the number of devotees to witness the Arudhra abhishegam (anointment of Lord Nataraja’s idol) at some temples have disappointed the devotees.

The mega event of bringing the idols of Lord Nataraja from other Saivaite temples in Kumbakonam town to the entrance of Aadhi Kumbeswarar temple was made possible by a group of local Hindu devotees who impressed upon offiials in the district administration and the Hindu Religious and Charitable Endowment Board to grant permission for holding the event citing the permission granted by the Cuddalore district administration for conducting the car festival and the Arudhra festival of Lord Natarajar Temple in Chidambaram.