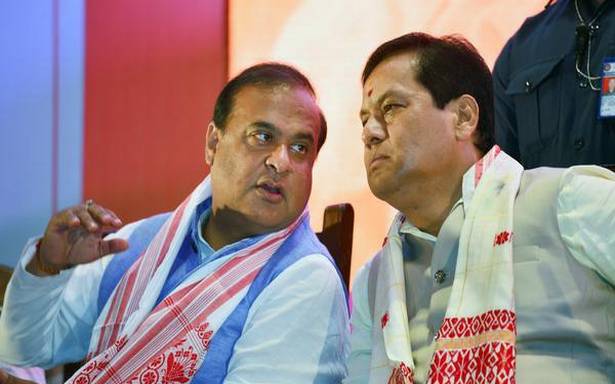 A meeting of the Bharatiya Janata Party (BJP) legislative party in Assam has been called on Sunday to decode who will be the next Chief Minister of the State. The suspense over the name remained unresolved on Saturday despite incumbent Sarbananda Sonowal and State Health Minister Himanta Biswa Sarma hot footing it to Delhi for meetings with the BJP’s top leadership.

Mr. Sarma, after a series of meetings with party president J.P. Nadda, Home Minister Amit Shah and BJP general secretary, organisation, B.L. Santosh, said that a meeting of the BJP’s legislative party in the State will likely be called on Sunday, “during which all your questions (on who is to be the next Chief Minister) will be answered.”

Sources confirmed that a legislative party meeting has been scheduled for Sunday, and that State in-charge Baijayant Panda and party general secretary Arun Singh may also travel to Assam on Saturday evening.

After the party dragged its feet on the question of a new Chief Minister for the State, even after all other States that had gone into Assembly polls at the same time had had new Chief Ministers taking oath of office, Mr. Santosh called up both Mr. Sonowal and Mr. Sarma on Friday night and asked them to travel to Delhi for meetings with Mr. Shah and Mr. Nadda. The MLAs from Naharkatia and Tingkhong — Taranga Gogoi and Bimal Borah, respectively — also travelled with Mr. Sarma. Mr. Gogoi is a former aide to Mr. Sarma, while Mr. Borah is said to be close to Mr. Sonowal.

Both camps remained tightlipped over the contents of the meeting or even the decision taken, and both maintained that each had a good basis for claiming the post of Chief Minister. Mr. Sonowal’s camp said that the CM was a leader from upper Assam, where the BJP had done particularly well, and that his government had been voted back to power in the State, making his claim strong. Mr. Sarma’s deft political handling of the anti-Citizenship Amendment Act protests and later, as Health Minister, of the COVID-19 pandemic, has strengthened his claim. Mr. Sarma was also instrumental in shoring up a new ally in the Bodo dominated areas, the United People’s Party Liberal (UPPL), after the Bodo People’s Front parted ways with the BJP. The UPPL won eight of the nine seats it contested in the Assembly polls, an important addition of seats to the National Democratic Alliance’s majority.

The BJP had, uncharacteristically, not projected the sitting Chief Minister as the face of its campaign in Assam for the reason that Mr. Sarma has been biding his time for the position ever since he left the Congress in 2015 and joined the BJP.