"When I started the book, I asked myself what actually remained as a country where I could send them," said author Jean-Yves Ferri in an interview with DW. " 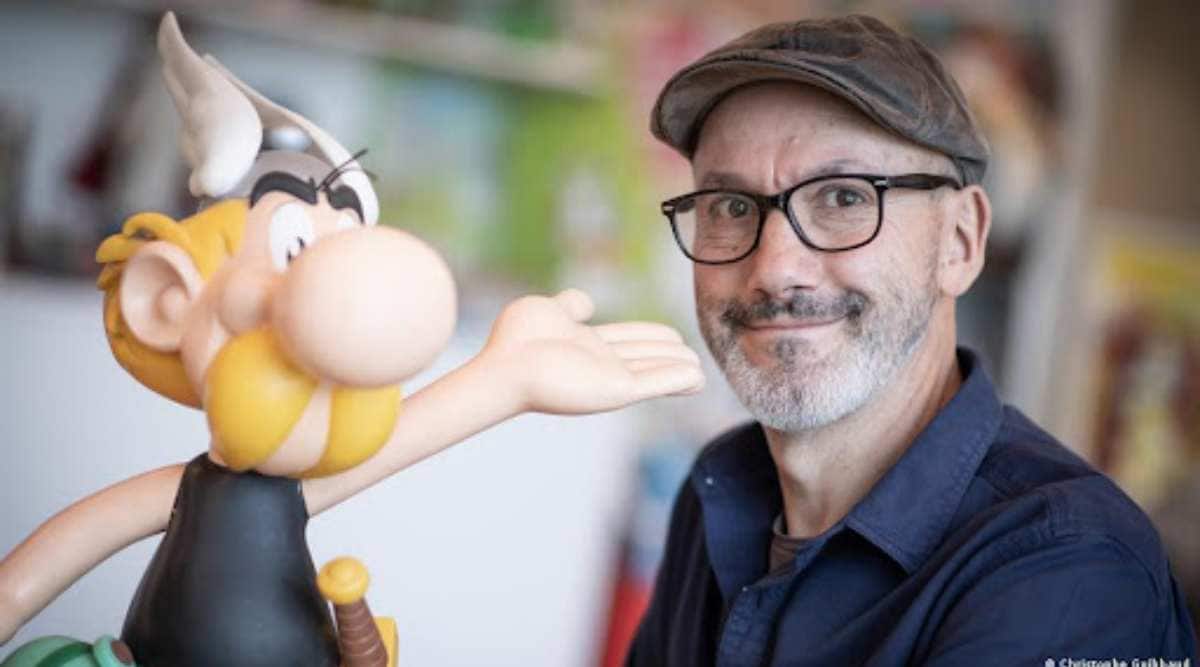 Freezing cold, a fearsome mythological beast, strong female warriors, and not to mention the Romans — they’re all part of the new comic, along with the tried-and-true protagonists: Gauls Asterix, Obelix and Getafix. In Asterix and The Griffin, author Jean-Yves Ferri and illustrator Didier Conrad send them to a cold region, Sarmatia on the far edge of Europe — completely new territory for our Gallic friends.

“When I started the book, I asked myself what actually remained as a country where I could send them,” said author Jean-Yves Ferri in an interview with DW. “I decided on the East, and at first I had in mind a story that parodied the Cold War a bit. And, finally, I created this Griffin story, which is completely made up.”

Browsing through history books led him to the Sarmatians, a warlike nomadic people who lived in what is now Russia, the author says. “And I made them into people who worship the griffin.”

The mystical griffin, a hybrid eagle/lion/horse creature, lures the Romans onto the scene. Caesar intends to capture the griffin for his circus games because “such a monster makes me popular with the crowds.” The Romans had learned about the griffin’s existence from a Sarmatian amazon they had captured. And so an expedition sets out into the cold. But the Gauls are also on their way to Sarmatia, alerted by the druid Getafix’s dream of a shaman — “they once met at a workshop for alternative magic” — asking him for help.

It is no coincidence that the scene resembles another famous comic, Herge’sTintin in Tibet. “I thought it would be funny to make an allusion to this volume, a slightly dreamy, somewhat strange story from the Tintin series,” Ferri says. “And here, too, it’s the same thing —I think this Asterix album is a little different.”

Unlike Italy, Spain and Switzerland, where earlier volumes are set, people are not familiar with Sarmatia. So the story does not create a parody, the author says. And the Gauls, too, are challenged “because everything in this country is different from what they know.”

In Sarmatian society, it’s the women who go to war — “War is a woman’s business” — and the men take care of home and hearth, brewing mead and making cheese. In the previous volume, Asterix and the Chieftain’s Daughter, Ferri had started incorporating contemporary issues including the gender discussion. “The topic inevitably appears in the series because it is part of our contemporary landscape. It’s normal that the atmosphere here is not the same as it was in the 1960s, when the village women fulfilled the role of that era.”

The comics make mention of global warming and the climate crisis in general, but there are few allusions to the coronavirus pandemic, “because it wasn’t that funny,” Ferri says. It is the fifth Asterix volume the French author realized in cooperation with illustrator Didier Conrad. The two continue the work of creators Rene Goscinny (1926-1977) and Albert Uderzo (1927-2020).

‘Get the tone right’

Asterix and The Griffin is the first edition to appear after the death of the original illustrator Albert Uderzo, who did see the drafts and sketches, however. “We always try to stay in the great ‘Asterix’ tradition and get the tone right,” Ferri says. “Anything that doesn’t fit properly ends up in the trash.”

For over 60 years (in Germany since 1968), the adventures of the “indomitable Gauls” have been providing fun for young and old. With about 385 million albums sold and translations into 111 languages and dialects, Asterix is one of the most successful comic series ever.

Only recently, Rene Goscinny’s daughter Anne found an unknown draft text. Goscinny wrote the 20-page fragment Asterix in The Circus shortly before his death in 1977. It is unclear if that story will ever be finished and published, however, and if Ferri and Conrad would take it on. “I was as surprised as everyone else that this transcript surfaced,” Ferri told DW.

Either way, the legacy of the unforgotten Asterix creators, Uderzo and Goscinny, lives on. Asterix and Obelix surely have more adventures to look forward to — perhaps in outer space?

This article was originally written in German.