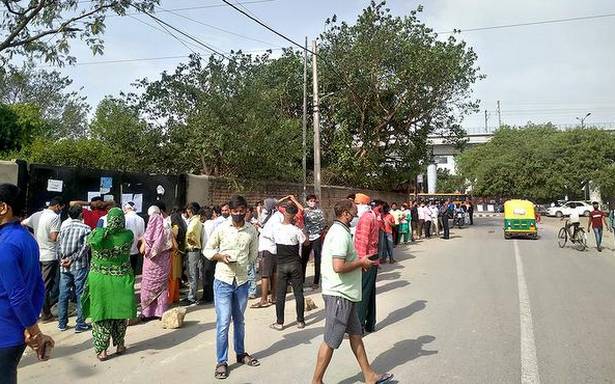 Limited testing per day has common man in distress

People are waiting outside government-run COVID-19 testing centres from as early as 4 a.m. in parts of the city. Of them, many do not get a chance to test as the centres were testing only a limited number of people.

One centre took 40 people, while the other took only 10, officials at the centre said. Many of them had come for the second and third day on the trot to get tested. But their wait goes on. The process is relatively smooth in private testing centres, some of which even offer round the clock testing.

Around 8.30 a.m. at a COVID-19 testing centre in Gautampuri Awas in Sarita Vihar, the situation has become tense as people began arguing with the security guards. More than 50 people were waiting in the queue. “We have been coming for three days. Tell us where else is testing happening then?” a person shouted at the guard.

The helpless guard replied: “We are taking only 10 people. Tajpur Pahadi has a dispensary, you can go there if you want.” “Give us a reference there,” another person asked him. The guard did not.

Chandra Mohan, 34, who was part of the crowd, said he was coming for the second day. “I am a waiter at a restaurant and my employer has asked to come with a negative report. I came here at 4 a.m. and from 9 a.m., tokens were given, but I did not get one. They gave only 10 tokens,” said Mr. Mohan, who earns only ₹15,000 per month, but is losing money as he can’t go to work without the report.

Outside another government centre at Meethapur Chowk, Darmender Kumar, 33, said he has come for the third day and has been waiting since 5.15 a.m.

“The people who came after 5.30 a.m. did not get the token for testing. People are facing a lot of difficulties. There should be some solution,” said Mr. Kumar, who had tagged his wife along too. He was lucky that he was the 32nd of the 40 people who were tested.