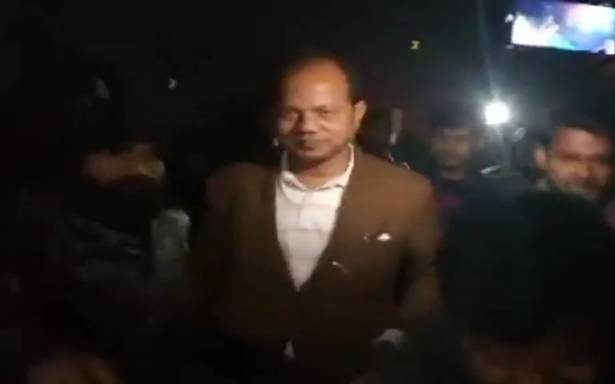 Jakir Hossain had filed a police complaint in 2017 against two Trinamool members, who were giving him death threats, says an official

The attack on West Bengal minister Jakir Hossain, who was seriously injured in a bomb blast in the state, was prima facie the result of a political feud involving the ruling Trinamool Congress, railway officials said Thursday.

A crude bomb was hurled at State minister Jakir Hossain as he waited to board a train to Kolkata at the Nimtita railway station in Murshidabad district on Wednesday evening.

The officials claimed the reason behind the incident could either be an internal political feud between Trinamool cadres or between the ruling party and the CPI.

The CPI had organised protests near Nabanna last week where police had to resort to lathi charge to control the crowd, the officials said, adding one CPI member had succumbed to injuries sustained in this lathi charge due to which there was tension in the area.

The CPI had further called for ‘rail roko’ from 11 a.m. Thursday in support of the ongoing farmers’ protest.

"There are also reports of internal feud between the Trinamool people, and Mr. Hossain himself had filed a police complaint in 2017 against two Trinamool members, who were giving him death threats" an official said.

"This incident is prima facie a result of political rivalry between Trinamool and CPI, and may have some links to the internal feud among the Trinamool cadres. The resulting chaos may disrupt the train operations and result in inconvenience to the general public," he said.

West Bengal Chief Minister Mamata Banerjee on Thursday alleged the bomb attack on State minister Jakir Hossain was part of a conspiracy as certain people were "pressuring" him to switch over to another party.

Ms. Banerjee, who went to the SSKM hospital to inquire after his condition following Wednesday’s incident, slammed the railways for its "lack lusture" way of functioning.

"It was a preplanned attack on minister Jakir Hossain. Some people have claimed the blast was remote controlled. It is a conspiracy. Some people (party) were pressuring Jakir Hossian to join them for the last few months. I don’t want to disclose anything more as investigation is on," Ms. Banerjee told reporters.

The attackers apparently knew about Hossain’s movement and must have been tailing him, she said.

The West Bengal government on Thursday handed over the investigation into the attack on Mr. Hossain to the Criminal Investigation Department (CID).

The railways in an official statement condemned the attack and said it had initiated relief and rescue measures and the injured persons were rushed by the RPF and other Railway authorities to the nearby hospitals.

"It may be noted that law and order is a State subject and State police is fully responsible for the same . Law and order on Railway platforms is also under the purview of GRP of State Government.”

"In all 25 persons got injured including the Minister of Labour in West Bengal Government Sri Jakir Hussain. Later on 10 of the injured have been moved to Kolkata hospital for treatment," the statement said.