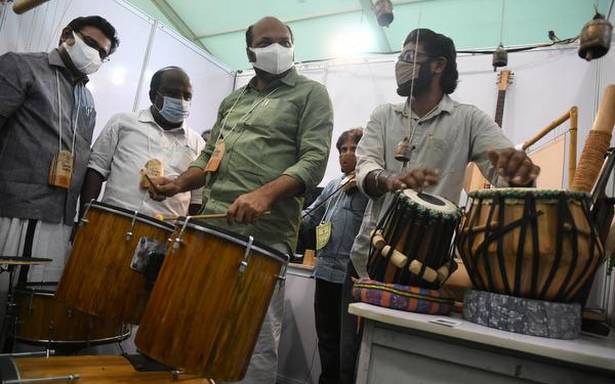 A five-day expo on the diverse applications of bamboo at Marine Drive in the city has turned out to be a major draw from the first few hours of its opening on Sunday, with hundreds thronging the stalls to take a look at bamboo products.

The exhibition is being organised as part of the 18th Kerala Bamboo Festival under the Kerala Bureau of Industrial Promotion with support from the Directorate of Industries and Commerce, the Kerala State Bamboo Mission and the National Bamboo Mission.

Industries Minister P. Rajeeve, who inaugurated the expo, said the exhibition had begun on a modest scale in 2004, but had grown in stature and number of participants. From around 60 exhibitors in 2004, the latest edition of the festival has 155 stalls by government agencies, NGOs, individuals, and groups of craftspeople.

At the entrance of the exhibition site is a bamboo house, displaying the durability of bamboo and its many applications. The house was erected by the Kerala State Bamboo Corporation, which is engaged in expanding the bamboo industry base to provide employment and livelihood to a larger number of people, especially those living close to forests.

A brief display of music, ‘Malamuzhakki’, generated from instruments made out of bamboo was one of the highlights of the opening day of the expo. The products on display include household items to furniture, food products, protein mixes, pickles and payasam.

This edition of the bamboo festival brings together around 200 craftspeople from across Kerala, who will display and sell their products.