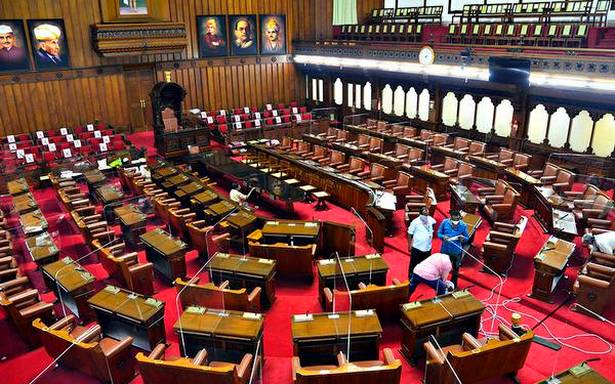 Armed with victories in a good number of seats in the recent elections to urban local bodies, the Basavaraj Bommai-led government is bracing for its first 10-day legislature session starting Monday.

This also comes amidst discontent in a section of the BJP over the formation of the Cabinet and allocation of portfolios. In an embarrassing twist on Saturday, disgruntled MLA Srimanth Patil said he was offered money to join the BJP from the Congress, which he did not accept since he was keen on a “suitable position”.

This and a number of other issues the State is grappling with — including price rise, management of floods, and effects of COVID-19 and alleged hushing up of deaths during the second wave — are expected to prepare the stage for a confrontation with the Opposition, especially the Congress, in the session.

The Chief Minister is expected to face some complex issues related to demand for reservation, from backward castes and Lingayat–Veerashaivas, and the dispute with Tamil Nadu over the proposed Mekedatu project.

The Congress, which has been alleging that the nation’s federal structure is being ruined and that Central institutions have been functioning in a motivated manner, is likely to raise the issue of implementation of the New Education Policy (NEP). The Congress is also set to target the government on its failure to get its share in the Goods and Service Tax and allocations in the Centrally sponsored schemes. Though Mr. Bommai met Union Ministers more than once in the last one month, the Opposition is unlikely to be satisfied by the State’s efforts in this regard.

The Opposition has been protesting against the Centre for limited financial support to the State during the pandemic, large-scale job losses, and lapses in giving compensation to unorganised sector workers. Handling of the recent floods and alleged non-payment of compensation to families affected by the 2019 floods are expected to come up for discussion too.

The government is likely to be put on the mat over its alleged “unilateral” decisions with regard to weekend and night curfew, opening of schools and colleges, and imposition of restrictions for Gauri–Ganesha festival without prior consultations.

With Leader of the Opposition in the Assembly Siddaramaiah terming the BJP government “20% commission government”, the Congress would raise the issue of alleged siphoning of funds by Minister Shahikala Jolle in her previous portfolio of Women and Child Development. Law and order issue, especially handling of the gang rape of a college girl in Mysuru, is also expectedly figure prominently.

The government will table about 18 Bills, including one aimed at banning online gaming. Some Bills would be related to Ordinances which will have to be converted into laws before they lapse.

With complaints from the Opposition benches, ahead of the session, presiding officers of both the Houses have said that all Ministers should mandatorily attend the session.

It would be interesting to see whether the Opposition would give its consent to Speaker Vishweshwar Hegde Kageri’s proposal for a joint session on the last day, September 24, with Lok Sabha Speaker Om Birla speaking on conduct and discipline of members during the session.