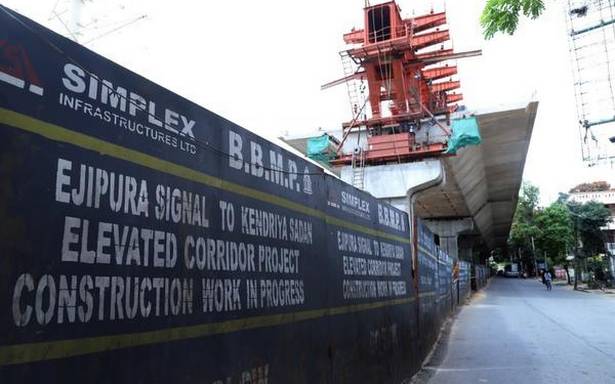 Work was to be completed in 30 months by November 2019, but is far from complete

With nearly no progress for months, the Bruhat Bengaluru Mahanagara Palike (BBMP) has decided to terminate the tender for the Ejipura elevated corridor. The civic body will be floating a fresh tender to complete the 2.5-km elevated corridor.

BBMP Chief Engineer (Projects) N. Ramesh told The Hindu that the work, which was to be completed in 30 months by November 2019, is far from complete. Of the 81 pillars, only 67 have been constructed. Just around 50% of work has been completed. “We have already initiated the process of terminating the tender. We will have to float a global tender for the remainder of the work,” he said.

The work had been contracted to M/s Simplex Infrastructure Ltd. and the work order was issued in May 2017.

“Despite several notices to the contractor, there was no progress on the ground, which was inconveniencing many motorists and residents of surrounding areas,” said BBMP sources.

Incidentally, Bengaluru Metro Rail Corporation Ltd. (BMRCL) had terminated a contract with the company for pending work on an elevated section of the Pink Line on Bannerghatta Road. BMRCL floated a new tender and had pointed out that the contractor could not execute the work as per the tender conditions.

B.T.M. Layout MLA Ramalinga Reddy said that the elevated corridor, which was taken up at a cost of ₹203.20 crore, was initially planned to reduce traffic congestion, besides reducing commute time by at least 30 minutes.

“Several meetings were chaired by the BBMP Chief Commissioners and even the Administrator. The roads were in poor condition due to the ongoing work. For three years, there were no street lights on the 2.5-km stretch. The contractor just could not adhere to the tender conditions despite several notices,” he said, and added that he had utilised some special funds to repair the roads that had been dug up for shifting utilities, apart from installing new street lights along the entire stretch. “All that remains now is footpath repair. Hopefully, whoever bags the new tender will expedite the work.”

Seven junctions along the corridor