If the exit polls are right, then Election 2019 marks a structural change in Indian politics — the end of Congress’s dynastic rule. 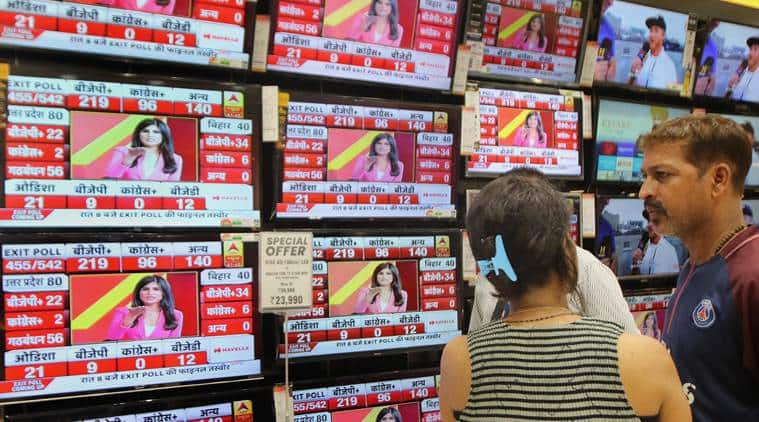 At the end of exit poll night, my co-panellist and political scientist/psephologist at CNN-IBN, Rahul Verma, turned to me and quipped: “Congratulations, You got the exit polls right”! By the strangest of coincidences, the election forecast (for the BJP and Congress alone) contained in my book Citizen Raj (and reproduced below), the exit polls seemed to centre around 270-280 seats for the BJP and around 50-60 seats for the Congress. My attempt (and the forecast made in February-Mach) was 274 and 57 seats respectively for the BJP and Congress.

It is no “triumph” to forecast correctly the exit polls. What matters is the real McCoy —which we will all know on May 23. Until then, we can speculate, and update as I do below. And we can begin to discuss what Election 2019 may have all been about (as needless to say, we have all been doing for the last six months).

I travelled to Karnataka in April 2018; to Madhya Pradesh and Rajasthan in November 2018; to West Bengal and UP in May 2018. I have talked to many a taxi driver and many a non-elite voter. Indeed, constantly, the discussion with voters has revolved around economic issues. Farmer distress was often talked about in UP, though unemployment discussion was spotty. In UP, the one state where the polls are suggesting the BJP will lose only 10-15 seats from the record 71 level in 2014, almost every rural voter, young, and old, and even those too young to vote, mentioned the menace of the holy cow. And no one seemed fearful of expressing any opinion, and doing so openly.

At the same time, and in direct contrast to the expectations of Delhi-Lutyens-Liberal-Khan Market media, the delivery of social services to “poor” individuals (those belonging to the bottom 70 per cent layer of the income pyramid) was often talked about. List the benefits — roads, toilets, LPG gas, houses, health insurance, bank accounts, bank transfers. A lot of individuals claimed they had never been “touched” by government policies, except now. Another aspect often mentioned was the absolute quality of leadership provided by Prime Minister Narendra Modi (i.e. not just that he was much better than the rest). They trusted him, and despite several faults, wanted to vote for him. Give him another chance, and may be another. And yes, and somewhat surprisingly for me, the rural voter often mentioned that Modi had enhanced India’s standing in the world. I say surprising because I belong to DLLK, and we elite find it difficult to understand why a rural voter should be worried about India’s standing in the world.

That is a cardinal mistake, and vividly illustrates why DLLK got this election so wrong (again, assuming exit polls are right — I believe they will be). This is a changed, educated, aspiring, middle-class India. Those who are not yet truly middle-class (about 50 per cent of the population) want to get there, and want to know the means to get there.

These are some of the fundamental reasons for why to me a Modi victory was not a surprise. There is a major “technical” reason why those expecting a genuine fight-back by the political opposition were likely to be disappointed. One important factor behind the “structural change” of the Modi election of 2014 (some disparagingly, and dismissively, called it an exceptional “Black Swan” election) was the margin of victory in some key states. In Gujarat, in 24 of 26 seats, the BJP won by a margin of more than 10 per cent. In Madhya Pradesh, 22 of 29 seats; in Maharashtra 22 of 23 BJP wins were with 10 plus margin; and in Rajasthan 20 of 25 fights. All these states there was no alliance to consider — they were straight fights between the Congress and BJP. I also conjectured in Citizen Raj that, perhaps, the most unfortunate event to befall the Congress (and DKLL members) was that the party won three states in December 2018. This lulled them into thinking that they had a good chance of making a come back in these states, and therefore, across India. Congress supporters were serious in believing that they could get within inches of their long-term post-1991 median of around 140 seats. It helped that the DKLL media was dominantly on their side and they did not have to counter questions about the basis for the claim that the Congress was mustering a ten percentage point swing in a head-to-head competition with the Modi-led BJP.

There was something else that hurt the Congress besides hope. It is that the odds of a dynast from the freedom-fighter era would still work charms. I have said it before many times (even when Manmohan Singh was PM, and before) that the Congress needs to shed the dynasty tag. That won’t guarantee them a revival — but it is an absolutely necessary condition. Understanding this may have been the major reason why I got the exit polls right. In the inside flap of Citizen Raj I state: “Will the Rahul Gandhi-led Congress emerge as the single largest opposition party; or will it become irrelevant and be relegated to electoral history? Most likely, and in the same order”.
There will be time to consider the future in the future. The table below provides my “last-minute” adjustments to my over two-month-old forecast. Not much change for the BJP except for West Bengal and Odisha. In West Bengal, the bet has to be that Hindus from the TMC move towards the BJP; they have a mountain to climb in terms of margins, and movement from the TMC will have a two to three times larger effect on the BJP chance of victory than a movement from the Left or the Congress (unless they en-masse move towards the BJP). I believe that West Bengal will reflect the deep polarisation induced by the so-called secular Mamata Banerjee’s Muslim appeasement policy.

Odisha is the other major change in my forecast — an increase from 6 seats in Citizen Raj to 13 seats now. There is a 50-50 chance that the BJP wins both the assembly and the Lok Sabha election. If this happens, then the BJP could proceed towards the 300 mark.
For the Congress, it is difficult to identify a silver lining. In my book, I had speculated that Karnataka might be the only state in the country where the Congress would reach double digits. It now appears that there will be no state where the Congress is able to achieve that status. If this doesn’t herald the beginning of the end of the Congress as we have known to love, and hate, over the last 50 years, then I frankly do not know what will.

(The writer is contributing editor, The Indian Express, and consulting editor, Network 18)