About 16% of the cases registered in August and September have been in the 0-10 age group, which is twice the national average, though none of them is serious. As Covid-19 seems to be on the wane in the rest of the country, the small hill state of Mizoram is not only reporting a disproportionately large number of cases, but also the highest prevalence amongst children.

About 16% of the cases registered in August and September have been in the 0-10 age group, which is twice the national average, though none of them is serious. Some of these infections were reported from outbreaks in residential schools and orphanages.

“About 30% of the new cases (in the last few days) are among those less than 18 years old. Children are unvaccinated and, moreover, people are fed up with following Covid-appropriate behaviour,” said Eric Zomawia, Director, National Health Mission, Mizoram, explaining the infections.

With a population of barely 12 lakh, Mizoram has been consistently among the top five in fresh infections the past few weeks, alongside much bigger states such as Kerala and Maharashtra. It currently has nearly 16,000 active cases. 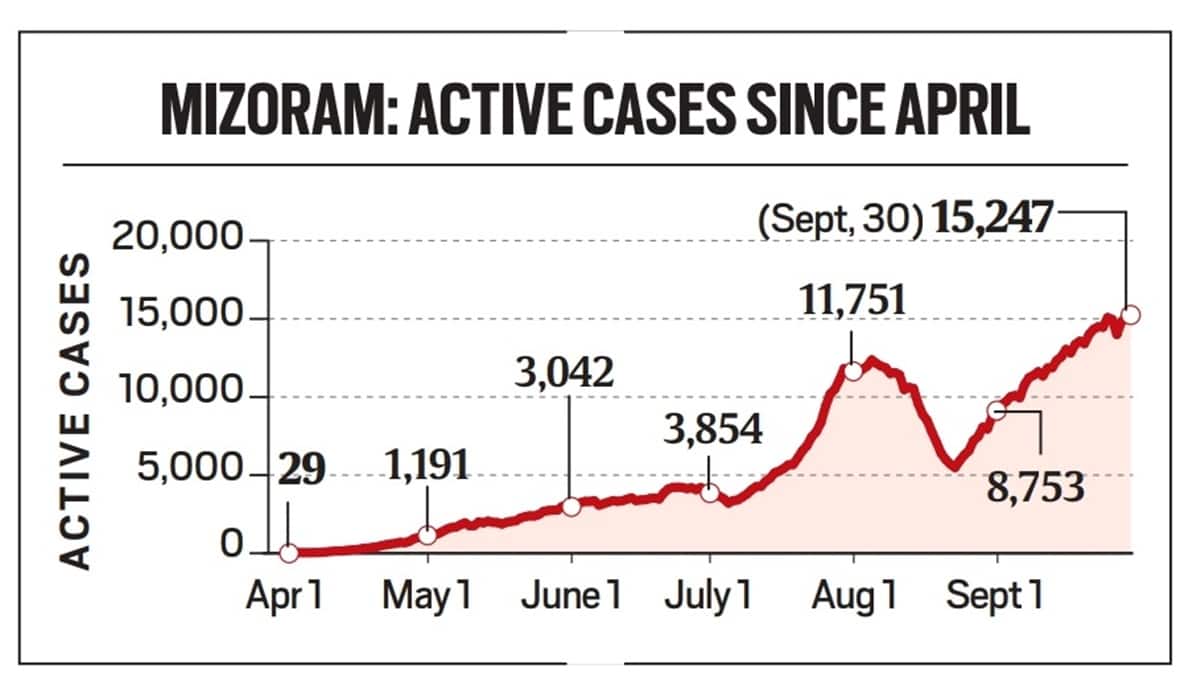 Last week, it recorded its highest single-day surge, with 1,846 cases — the third highest count in the country that day. On Monday, its positivity rate was 31.77%, against the national average of 1.42%. Its September count of 32,000 infections was a 60% rise over August.

Even decent vaccine coverage has not been able to control the infections — 88% of the eligible population of the state (or 6,80,690 people) have received at least one dose, while about 63% (4,42,602) are fully vaccinated. PTI reported that a Central team was expected to visit the state soon to assess the situation.

Dr Pachuau Lalmalsawma, State Nodal officer of the Integrated Disease Surveillance Programme, said the surge could be attributed to “aggressive” testing and reporting of infections in Mizoram, as well as contact tracing.

He said children too were tested as part of the contact tracing model. “In a family, if one person shows symptoms, we will test every other member, including a baby,” he said. “Even if family members test negative, they are quarantined for three days, after which an RT-PCR test is done.”

Health Minister R Lalthangliana attributed the high number of cases to their testing model. “No other state is carrying out mass testing, contact tracing with the police force involved,” he said, adding that they “search all corners of the state for suspected cases”.

Lalmalsawma said the high positivity rate was due to testing of “targeted populations”. “So we do not get many negatives.”

Besides, in “restricted areas” that report a high number of cases, officials do “active case searches”. “We seek out people with Covid symptoms, go house to house,” said an official with the contact tracing team, who did not wish to be named.

Another reason for the surge, experts believe, is the prolonged lockdown in the state — which might have ended up proving counter-productive. Even as other states began to unlock after the first wave ebbed, Mizoram didn’t ease restrictions. Since March 2020, the state has been under some form of curfew, and “lockdown-like” restrictions imposed during the second wave — when it did not report many cases — are partially in place even five months later. “It is like a world-record lockdown,” said an official.

Probably because of the stringent measures, the state took almost seven months to record its first 1,000 infections. Until a 62-year-old man, with comorbid conditions, died in October 2020, it remained among the few states and Union territories in the country with zero fatalities during the pandemic.

A senior official of the ICMR-Regional Medical Research Centre, Dibrugarh, said: “The stringent lockdown measures during the first and second wave may have resulted in a large chunk of the population still being vulnerable to Covid-19.”

While a full serological survey has not been done in Mizoram, Lalmalsawma said mass testing in areas shows most people are not immune to the virus.

A health official in Mizoram said that apart from the lockdowns, “We used too many fear tactics in the beginning. In some localities, if someone who went to a shop tested positive, everyone who went to the shop was tested,” he said.

The silver lining is that most cases have been mild. That is why despite not having the adequate medical infrastructure, it has been able to cope with the current infections. With 313 deaths, the death rate is at 0.03%.

Pointing to this, the Health Minister said: “Our main aim is to reduce the fatality rate. In the first wave, we had 140 beds and 13 ICU beds. We have now increased it to 307 beds and 34 ICU beds. We will continue to expand that.”

Noted virologist Gagandeep Kang said children getting infected was not yet a cause of concern as the cases were mild. “Also, the data is not presenting a very clear picture right now. In some places, for example, a rise in confirmed infections amongst children is mainly because more tests are being conducted among them as compared to earlier,” she said.