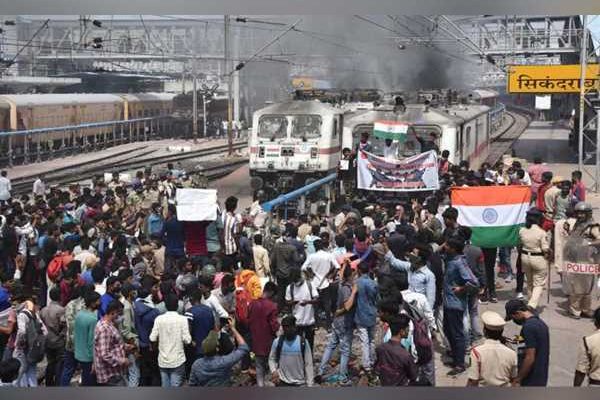 In the wake of Bharat Bandh call given by some organisations to protest against recently announced scheme Agnipath for Army recruitment, the police and railway authorities are on high alert in the two Telugu states Andhra Pradesh and Telangana. In order to curb any agitations by the Army job seekers, security was imposed strictly at all major railway stations, offices of the Central government and Army recruitments authorities in these states.

The security personnel were checking vehicles and tickets of passengers to ensure that the protestors did not enter the stations. High security has been set at Secunderabad, Nampally, Kachiguda stations in Hyderabad, Kazipet, Jangaon, Vijayawada, Guntur, Visakhapatnam, Tirupati and other major stations.

It has been confirmed by the police that there is no permission for Bharat Bandh or protests. They have warned of strict action against those taking part in the agitations. Since the beginning of the violence at the secunderabad station, authorities at other major stations in both the states remained on high alert.

Railway police probing violence at Secunderabad station found that the owners of coaching institutes misguided the youth to stage protests on the lines of the one viewed in Bihar a few days ago so that they could draw the attention of the Central government. A few WhatsApp groups were created to mobilise youth from different districts. They arrived in Hyderabad with a plan to create disturbances at Secunderabad station, said the police.