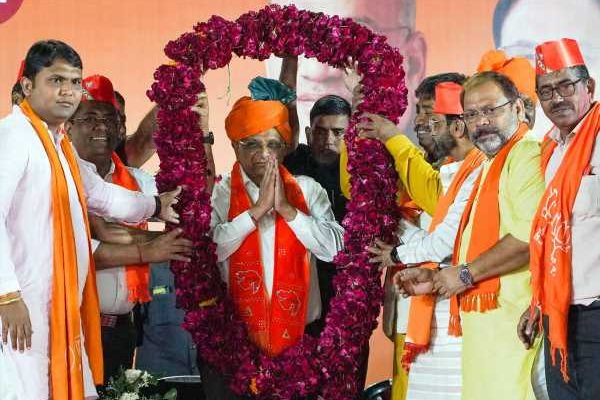 While leader after leader from the Bharatiya Janata Party attributed the victory of the party to the contribution made by ‘Narendrabhai and Amitbhai‘, Chief Minister Bhupendra Patel, too, helped the party through the government’s performance.

‘The people of Gujarat have rejected anti-national elements in this election and have voted for the BJP’s track record of development in the state,’ Gujarat BJP President C R Paatil told a press conference as trends began coming in, announcing Bhupendra Patel would continue as chief minister and his oath ceremony would take place on Monday, December 12.

Winning the Vedanta-Foxconn investment for semiconductors and fabs amounting to Rs 1.54 trillion from neighbouring Maharashtra, added to his record.

Patel’s work was hyper-local — which left leaders like Narendra Modi and Amit Shah to emphasise how the BJP had managed to propel India to the centre stage globally by referring, even in rural gatherings, to the G20 meeting presidency of India.

The Congress, by contrast, was hit by a double whammy — of the Aam Aadmi Party, which managed to snag a chunk of its votes, but also by the All India Majlis e Ittehadul Muslimeen, which fielded 13 candidates, including two non-Muslims, that ate into Congress votes in Muslim-dominated seats like Jamalpur-Khadia and Vadgam and gave the balance of advantage to the BJP.

The Congress’s Imran Khedawala lost the Jamalpur-Khadia seat and Jignesh Mevani won by a narrow margin.

By contrast, the BJP won 12 of 17 seats with a high Muslim population — an increase of six seats — without fielding a single Muslim candidate.

An example is Dariapur, a Muslim-dominated seat that the Congress held for 10 years. Congress MLA Gyasuddin Shaikh lost to the BJP’s Kausik Jain.

By persuading three important BJP leaders — former CM Vijay Rupani, and ministers Nitin Patel and Bhupendra Singh Chudasama — to stay out of the assembly contest, the BJP’s central leadership has made it easier for Bhupendra Patel to claim the mantle of CM and also recast his team.

However, the BJP’s massive victory will make it hard for the party to derive a criterion for selecting ministers, as the claimants will be many and the berths, few.

This victory is the precursor for the Lok Sabha election though how the Congress will pick up the pieces remains to be seen: its in-charge in Gujarat, Raghu Sharma resigned soon after the trends were out and a metaphor for the party’s dismal performance was the taking down of the digital ‘clock’ outside its office which was the countdown for the polls.