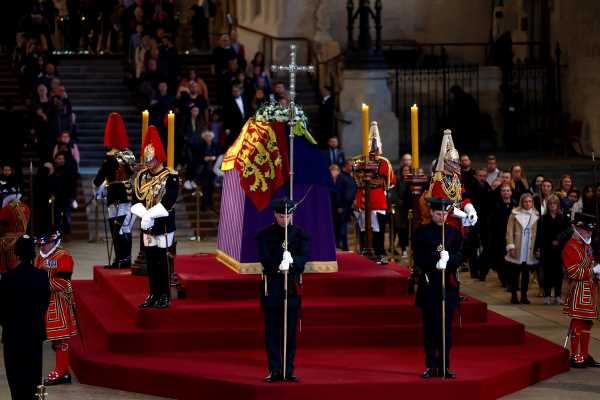 Large screens across the parks of the UK and many cinema chains are being prepared to screen the state funeral of Queen Elizabeth II from Westminster Abbey in London on Monday morning, the UK government said on the last day of a gigantic queue on Sunday to file past the coffin of the late monarch Lying-in-State at Westminster Hall.

The UK’s first state funeral in 57 years follows a strict protocol and will be steeped in military traditions, with rehearsals being undertaken for many days.

The department for culture, media and sport said there will be public viewing areas set up in London and Windsor, where the Queen will be laid to rest later on Monday — a public holiday across the UK.

A “national moment of reflection” will take place at 8 pm local time on Sunday, when community groups, clubs and other organisations, as well as people at home are being asked to observe a one-minute silence in memory of the monarch.

“Cinemas across the UK are also opening their screens to show the funeral — bringing together local communities to commemorate,” it noted.

The queue of mourners will close at 6.30 am local time on Monday morning for preparations of the state funeral, being attended by hundreds of world leaders, royals and representatives of community organisations, including Indian President Droupadi Murmu who arrived in the UK on Saturday evening.

The Queen’s coffin will be conveyed in procession from Westminster Hall in the Palace of Westminster to Westminster Abbey for the funeral service to commence at 11 am and conclude around an hour later with a national two-minute silence.

A public procession will begin at 12.15 pm as the late monarch’s coffin travels from Westminster Abbey to Wellington Arch in London for its onward journey to Windsor.

The Queen, who died aged 96 at her Balmoral Castle residence in Scotland on September 8, will be buried in a private royal ceremony beside her late husband, Prince Philip, at the King George VI Memorial Chapel on Monday evening.

On Saturday, her eight grandchildren – Princes William and Harry and their cousins Zara Tindall, Peter Philips, Princesses Beatrice and Eugenie and Lady Louise Windsor and Viscount James Severn — observed a vigil by her coffin even as thousands continued to file past to pay their respects.

King Charles III and Prince William also made a surprise appearance to greet members of the public in the queue to thank them for their condolences and for enduring the long hours of waiting on foot to pay their respects.

Charles’ wife, Queen Consort Camilla, has paid tribute to her late mother-in-law in a moving television interview to be aired on Sunday.

“She’s been part of our lives forever. I’m 75 now, and I can’t remember anyone except the Queen being there,” said Camilla.

“It must have been so difficult for her, being a solitary woman. There weren’t women prime ministers or presidents. She was the only one, so I think she carved her own role,” she said.

On a personal note, she added: “She’s got those wonderful blue eyes, that when she smiles they light up her whole face.

“I will always remember her smile. That smile is unforgettable.”

Meanwhile, the King is due to hold audiences at Buckingham Palace with British Prime Minister Liz Truss and Prime Ministers of the Realm – including the leaders Tuvalu, Antigua and Barbua, and Papua New Guinea.

He and the Queen Consort are then due to host overseas dignitaries at the palace on Sunday evening for an “official state event” ahead of the state funeral.