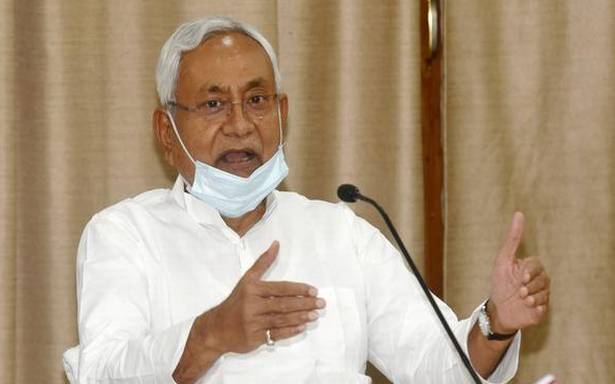 He is perceived to be moving closer to the Opposition RJD by his party members.

“The party’s disciplinary committee has served a showcause notice to Tunna ji Pandey and asked him to reply to the notice in 10 days. After that, the party will also take action against him,” said senior State BJP leader and Health Minister, Mangal Pandey. Party sources, however, told The Hindu that Mr. Pandey “may be expelled from the party after the notice period expires”. Of late, Mr. Pandey is said to have come closer to the Opposition Rashtriya Janata Dal (RJD). “Mr. Pandey these days is not even being invited to party meetings,” said a senior State BJP leader.

Mr. Pandey has been attacking Mr. Kumar on several issues. On June 2, he triggered a controversy with one of his social media posts that said, “Whatever I had said was right that in this election, people had given their mandate to elect Tejashwi Yadav but Nitish Kumar ji came to power by misusing official machinery.” His term in the State Legislative Council will expire on July 16.

Earlier, Mr. Pandey had taken on Mr. Kumar through a social media post saying that “he [Mr. Kumar] has been a Chief Minister of circumstances”. “Nitish Kumar is a Chief Minister of circumstances. Former RJD MP Mohd. Shahabuddin was right by saying this but he got punishment. He [Mr. Kumar] is not my leader. I’m just a BJP leader and I’ve no connection with the mahagathbandhan,” said Mr. Pandey on Twitter.

His comments had apparently incensed the Janata Dal (United) and other alliance partners. However, even before NDA leaders could react, the BJP MLC, in another post, accused the Chief Minister of being involved in corruption. “Chief minister has been hand in glove with liquor smugglers since 2009. I’ll expose him and ensure that he lands in jail,” said Mr. Pandey, while adding that he was not afraid of speaking the truth. “I can speak [the truth] against anybody, whoever he may be,” he had said.

Mr. Pandey’s tweets sparked sharp reactions from the ruling JD(U) and alliance parties. “Nobody can prove corruption charges against our leader Nitish Kumarji. The BJP MLC Tunna Pandey himself was in liquor business and he is peeved with the government after prohibition. But whoever will take on our leader Nitish Kumar ji, we’ll not tolerate,” said Sanjay Singh, JD(U) MLC and party spokesperson.

The party’s national principal general secretary, K.C. Tyagi, said, “Nitish Kumar has been the leader of NDA in Bihar for over 15 years and he has been the choice of PM Narendra Modi, Home Minister Amit Shah, and BJP national president J.P. Nadda. We [BJP-JD(U)] have been working together for decades and the BJP doesn’t tolerate such indiscipline,” Mr. Tyagi told mediapersons.

The Rashtriya Lok Samta Party (RLSP) and the Hindustani Awam Morcha (​Secular), both NDA allies, also reacted sharply and hoped that the party would take action against Mr. Pandey. “Such comments must be reaching you, too, Sanjay Jaiswalji [State BJP president]. If any JD(U) leader would have made such a comment against the BJP or any of its leaders, then … till now…!” said RLSP president Upendra Kushwaha on Twitter. After a major defeat in the 2020 State Assembly election, Mr. Kushwaha had joined hands with the JD(U) and came closer to Mr. Kumar.