The Indian Express visited four rural health centres in Bhagalpur in the span of a day. And this is what emerged. 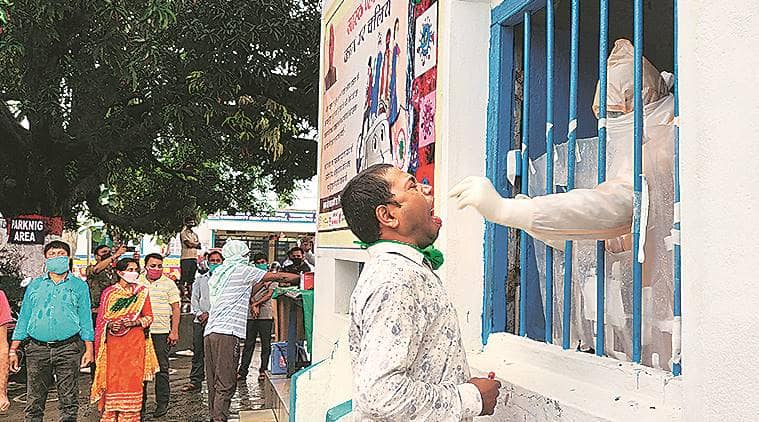 In Bihar’s Bhagalpur, the fight against Covid captures the challenge faced by many small towns across India. The district, which is at the centre of the state’s outbreak with 479 cases — second after Patna with 584 — has an aspirational town with ambitions of becoming a “Smart City”.

But in its villages, health solutions are far from smart: crowded rooms, staff and patients without masks and gloves, flawed testing protocols and patchy infrastructure.

At Dariyapur, where Union Minister of State for Health and Family Welfare Ashwini Kumar Choubey hails from, the additional PHC was shut with residents complaining that they have to travel 15 km for basic treatment. Officials say it is open only to conduct immunisation.

The Indian Express visited four rural health centres in Bhagalpur in the span of a day. And this is what emerged:

Entry is monitored by a guard with a mask on his face, but no gloves. A few feet inside, two women are seated behind a small table with some papers and a thermal temperature scanner. One of them is nurse Rekha Kumari, who has a mask but no gloves, although there is a box of surgical gloves on the table.

As people approach, many without masks, Kumari checks for temperature and directs them inside. “If they have come for tests, or if they have symptoms, I send them to the registration counter,” she says.

The hospital has two doctors, one of them AYUSH, for the entire block with a population of over 1.42 lakh. “Mostly, it is either contacts of people who have come from outside and have symptoms, or those chosen at random by Asha workers. We send the samples to Bhagalpur for testing. The people who come here, even with symptoms, are sent back for home quarantine. If they test positive, an ambulance is sent to take them to the Covid Care Centre or isolation ward in the district headquarters,” says a doctor.

At the registration centre, two staffers sit behind a computer and a register. None of them have masks on. Nobody at the PHC is wearing a PPE kit. The doctor says there are “10 or 12” in stock, mainly for the lab technician who collects samples. The technician, Mohammad Firdaus, walks in at 11.50 am, wearing a mask and a hairnet.

One room has a board that reads “Corona Virus Isolation Ward”. The ramshackle door is open, and four steel beds with signs of rust are haphazardly placed. There are no oxygen cylinders, no monitors. Dr Shyam Narayan, the AYUSH doctor, says, “This is not functional yet. For that, we will need to sanitise it twice a day and seal it off. We don’t have the facilities to do that.”

Unlike the PHC in Sabour, there are no tables for screening at this referral facility. There are no checks on entry or movement, either. Inside, to the left, is a small crowd waiting for maternity check-ups, many without masks.

Dr Anjana Kumari, in-charge, says there are six doctors, and attendance is not a problem. “Each day, we are given a target of how many to test. Today, we have to collect 30 samples,” she says. Nobody in the PHC is wearing a PPE kit, but Kumari says the lab technician who collects samples will. Soon, the collection starts from a window partially covered by a thin, torn plastic sheet.

This facility does not collect samples, but is the first port of call for the village. The walls seem freshly painted, and has a sign: “Health and Wellness Centre”. But the gate is locked.

Kanhai Singh, who stays next door, says the centre opens “sometimes” for “an hour or two for the staff to file attendance and leave”. “If someone from the village falls ill, we go to Shahkund,” he says.

Shankar Paswan, another resident, is angry because he was one of the labourers that built the facility. “We ask God to keep us safe because the door here is always shut,” he says.

Bhagalpur Civil Surgeon Vijay Kumar Singh says the additional PHC “opens only on the day immunisation has to be carried out”.

The CHC is in the middle of pool-testing 100 people. Outside the room of Dr J P Singh, the in-charge, are at least 20 people. The registration is being done next door by four staffers, their faces covered but with no gloves. There are over 50 people waiting, squashed next to each other in chairs. The driver of one of the two ambulances, both hired from a private operator, says he hasn’t been paid his salary since April, and has not been given a PPE kit. “I transport positive cases almost every day,” he says.

Outside, there is a plastic sheet taped across a window, with two holes through which a man in a makeshift PPE sticks his hands out to take nose and throat swabs. The samples are dropped into a test tube held by the person being tested, who puts it in a box kept in the open on a table.

Asked about the problems faced by these health centres, Civil Surgeon Singh says, “Whatever directions come from above, we pass them on. We will ask the PHCs about all these issues and tell them to strictly ensure social distancing.”