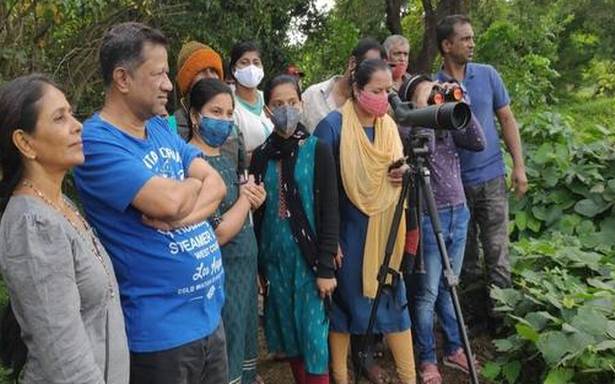 Thippayana Kere lake near Sardar Vallabhai Patel Nagar along the Outer Ring Road in Mysuru, which was recently restored, is now home to more than 40 varieties of birds.

The water body, which was on the verge of extinction due to dumping of waste, was taken up for rejuvenation by the district administration about five years ago. It was not only a valuable contribution to maintaining the eco-system of the region, but was also attracting a wide variety of birds.

More than 25 bird watching enthusiasts turned up for the second bird-watching session organised by the Mysuru Science Foundation along with the Aranya Outreach on Sunday. “We were here last time in January this year. But, this time the number of birds are more”, said the Foundation’s G.B. Santosh Kumar.

Spread across 9.5 acres of land, the water body is now being maintained by the Mysuru zoo authorities.

The bird watching enthusiasts, who participated in the session under the guidance of wildlife photographer M.K. Sapthagirish, were asked to observed the wings, neck, colour, tail, beak, legs etc. of the birds closely through the binoculars. The participants were also advised to refer to a bird guide.

Mr. Santosh Kumar emphasised the need for people to conserve lakes for future generations. He called upon the authorities to ensure that sewage water and underground drainage (UGD) is not let into Thippayyanakere. The environmentalists expressed concern over the possible decay of the water body if sewage and UGD pipelines are let into the lake.

In the coming days, similar bird watching sessions will be held in other water bodies of the city of the City that needs immediate attention.

Mr. Santosh Kumar said their organisation will consider holding a programme at Devanur Lake next.