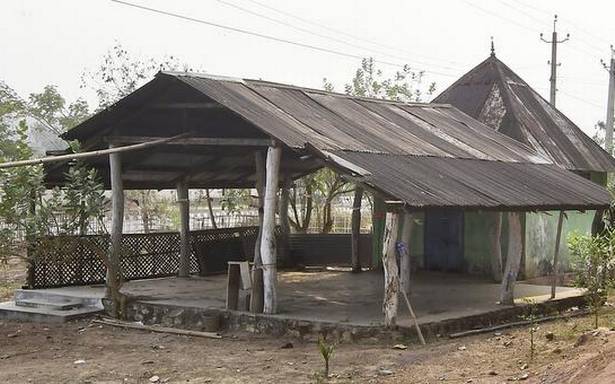 Annual grant of ₹2.5 lakh per community prayer hall initiated by Sonowal govt. could be a masterstroke in terms of votes

Mandate 2021 has made the ‘namghar’, a common feature across Assamese villages and urban localities, quite special.

Five centuries ago, saint-reformer Srimanta Sankaradeva and his disciples introduced the namghars as a place of congregation for local-level spiritual, cultural and educational events. Over time, the ubiquitous structures yielded space for political discussions.

A grant appears to have made these namghars more electorally relevant than ever before. The importance of the grant was not lost when the BJP-led coalition government released ₹2.5 lakh each to 8,756 namghars in August 2020 along with ₹10 lakh each to 377 temples, mosques and churches.

The State’s Cultural Affairs Department had estimated about 1.10 lakh standalone neighbourhood namghars — structures built by communities or villages and not within a satras or Vaishnav monastery.

“Going by the number of Hindu villages — and not all of them sport a namghar — this seems to be an overestimation. A more realistic estimation may be 40,000,” said Pulin Deka, who wrote a book on the namghar institution.

The Congress government had also “overestimated” the number of satras — they have considerable influence among adherents of Eksarana sect of Hinduism specific to Assam — for grants. The BJP-led government went beyond the satras to splurge on the standalone namghars.

“When you look at the number of voters associated with a beneficiary namghar, the move could be a mathematical masterstroke,” said Sandhya Goswami, retired professor of political science at Gauhati University.

An average of 70 households are associated with a namghar. The community ownership of some namghars range from 150 to 400 families.

A village or urban locality manages its namghar. Some are run by organisations such as Srimanta Sankaradeva Sangha, headquartered in central Assam’s Nagaon.

“We have more than 6,000 units but about 5,000 of them have namghars. Most of our namghars have received the grant, which we hope will cover all the namghars and be made annual if the BJP returns to power,” the Sangha’s secretary general Babul Bora told The Hindu.

“People are happy that Finance Minister Himanta Biswa Sarma responded to our proposal and provided the grant. We cannot but be grateful on the day of election,” he added.

Urban areas not left out

Many of the namghars that have received the grant are in the rural areas. The urban pockets cultivated by the BJP have been on the government’s radar too.

“We have received the allotment letter against which we submitted the estimate. We hope to get the grant after the elections,” said Bhaskar Goswami of Guwahati’s Silpukhuri Rajahuwa Namghar.

“Money for the namghars could translate into votes. But we are not sure if such a strategy in the name of religion can be sustained,” Ms. Goswami said.