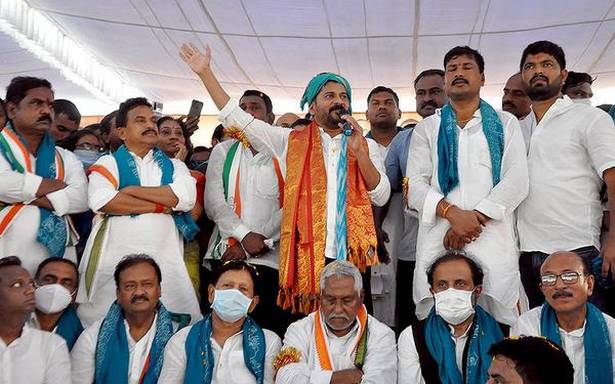 ‘Turmeric board yet to be set up’

Bharatiya Janata Party (BJP) leaders, including Ram Madhav, Bandi Sanjay and Arvind Dharmapuri, were under fire from TPCC working president A. Revanth Reddy, who termed them ‘Liars from a Liars Party’ for ‘cheating’ turmeric farmers after making tall promises before the 2019 Parliament elections.

Mr. Reddy said that in the presence of Mr. Ram Madhav, Nizamabad MP Arvind signed the bond paper promising a turmeric board within five days if he was elected. “So, the responsibility lies with Mr. Ram Madhav as well as Bandi Sanjay whose Karimnagar Parliamentary constituency has a large number of turmeric farmers,” he said.

He offered to make all arrangements if turmeric farmers wished to hold a protest at Jantar Mantar in Delhi or any other place to pressurise the BJP government for establishment of the turmeric board.

Mr. Reddy said that all that the Central government needed to spend was ₹100 crore per year for the turmeric board that would serve thousands of farmers who produce 2.94 lakh tonnes of turmeric. In Nizamabd district alone, it is cultivated in 50,000 acres but farmers were not getting more than ₹5,000 per tonne. During the Congress rule, the price touched ₹15,000 per tonne, he said.

He added that Prime Minister Narendra Modi promised to double the income of farmers by 2020 but failed to even set up a turmeric board in Nizamabad. As of now only 6% of turmeric is being exported but with the board, exports would increase and farmers would have access to more markets and money.

The Congress leader also targeted Bandi Sanjay saying that he speaks loud against the Chief Minister, but is silent on seeking action against his ‘corruption and unfulfilled promises’. “Mr. Bandi Sanjay does not have the heart to question KCR on why he retracted on farm loan waiver, free fertilizers, input subsidy, removal of crop insurance and KCR’s threats to farmers on regulated farming,” he charged.

Mr. Jeevan Reddy said that TRS MLC Kavitha cheated farmers when she was the MP and forgot after she lost. He asked farmers to book a cheating case against Mr. Arvind for failing to bring in a turmeric board.

He also targeted the CM saying that he retracted on opposing the new farm bills after forcing his ministers to sit on the road. He also slammed KCR for not reviving the Nizam Sugar Factory, which he promised to do within 100 days after coming to power in 2014. “He has compromised with an Andhra company, Gayatri Sugars, to leave sugarcane farmers in the lurch,” he alleged.