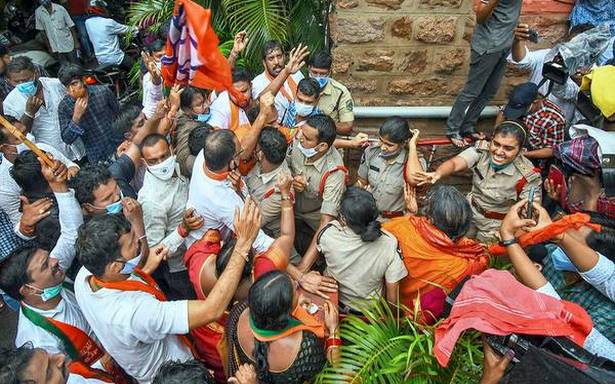 A tense situation prevailed at the Collectorate for sometime on Monday as police personnel tried to prevent BJP activists, who tried to barge into the Collectorate building, demanding withdrawal of the orders issued by the State government against holding of Vinayaka Chaviti festival at public places.

A large number of the party leaders and activists and representatives of other organisations like the Sadhu Parishad took out a rally from the Gandhi statue, near the GVMC, to the Collectorate and made their way into the Collectorate premises. The party leaders and workers entered into arguments with the police personnel and raised slogans against their high-handed behaviour as they were stopped from entering into the building.

The policemen finally managed to push them back and out of the premises onto the Main Road, where they continued the protest.

The protesters raised slogans like ‘Jai Shri Ram’, ‘Bharat Matha Ki Jai”. Women activists were seen picking up arguments with the policewomen and resisted their attempts to push them out of the premises.

MLC P.V.N. Madhav, who participated in the protest, demanded that permission be given for organising the festival in the open, while insisting on the organisers to adhere to COVID-19 protocols and warned that the BJP would intensify the agitation all over the State, if the State government failed to accord permission.

He alleged that the YSRCP government was showing discrimination against Hindus and wondered whether COVID-19 restrictions were applicable only to celebration of Vinayaka Chaviti festival and not to holding of birth and death anniversary events of leaders. He sought that the celebrations should be allowed on condition of following COVID-19 guidelines. Sadhu Parishad State president Srinivas Nanda Saraswathi, Viswa Hindu Parishad general secretary Subrahmanyam, BJP Parliament district president Medapati Raveendra, Bharatiya Janata Yuva Morcha (BJYM) State president K. Surendra Mohan and Mahila Morcha president U. Sujata were among those who participated.