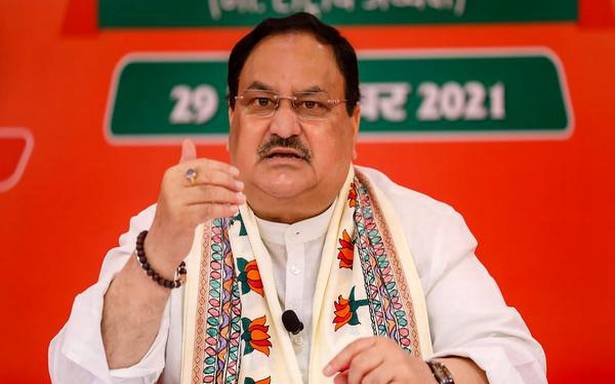 BJP president JP Nadda on Saturday said that party workers across the country will visit khadi stores from October 2 to 7 and purchase locally made products to promote its use.

To mark Mahatma Gandhi’s birth anniversary, Mr. Nadda visited a Khadi store in the national capital and purchased khadi products from there. The BJP leader said that to build the India of Gandhi’s dreams, the Modi government is focusing on gram swaraj, cleanliness and on making the country self-reliant.

He said that under the Modi government, as many as 11 crore toilets were built which empowered women. Similarly, Mr. Nadda said, the use of khadi increased by 188% after 2014, while its production jumped by 101% and sales by 129%.

All this was visible in khadi’s turnover which was ₹96,000 crore in 2020-21, the highest ever, Mr. Nadda told reporters, and added that around 6 lakh jobs were generated with this surge in khadi use.

He announced that BJP workers across the country will visit Khadi stores from October 2 to October 7 to promote its use. The BJP president said higher use of khadi helps strengthen gram swaraj and makes India self-reliant.

In a similar gesture to promote Khadi, party leader and Union minister Dharmendra Pradhan tried his hand at spinning charkha, a symbol and logo of khadi.

Other party leaders and Union ministers carried out sanitation drives as part of the Swachh Bharat campaign which was launched by the Modi government in 2014 on Mahatma Gandhi’s birth anniversary.

As part of the campaign, Union minister Anurag Thakur carried out a sanitation drive in Dharamshala, while his deputy in the Information and Broadcasting Ministry L Murugan sweeped the premises of All India Radio using a broom.