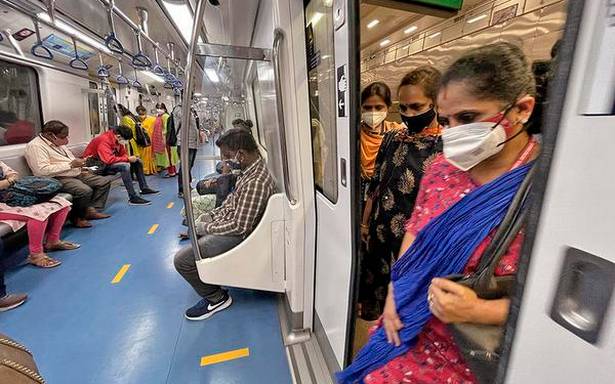 It had raised ₹300 crore through bonds for the first phase

The Bangalore Metro Rail Corporation Ltd. (BMRCL), which like other mass transit systems has taken a financial hit due to the pandemic, is contemplating issuing Namma Metro Bond Series II to raise ₹500 crore for Phase II of the project. This includes the ORR Line (Phase 2A) and Phase 2B (Airport line) totalling to a length of 58.19 km at an estimated cost of ₹14,788.1 crore. BMRCL had earlier raised ₹300 crore through bonds for the first phase of the project.

Rating agency Brickwork Rating has already reaffirmed its rating of Namma Metro Bonds – both Series I (₹300 Crore) and the proposed Series II (₹500 crore) in March 2021. However, when contacted, Rakesh Singh, MD, BMRCL, said the corporation is still contemplating and has not yet made a final decision on issuing Series II of Namma Metro Bonds. “A decision on this will be taken soon,” he said.

With the Union Cabinet finally approving Phase 2A and 2B of the project in April earlier this year, the tenders that are almost finalised are ready to take off. However, the pandemic is expected to hit funding for the project. Expecting a delay in release of funds from the government for Phase II, BMRCL has also asked State Bank of India for an Over Draft (OD) of ₹500 Crore for bridge financing. Mr. Singh confirmed this development.

BMRCL has already got approval for a loan of $500 million (approximate ₹3,860 crore) from Asian Development Bank (ADB) and a loan of ₹3,717 crore from Japan International Cooperation Agency (JICA).

Earnings have also taken a hit. In February 2020, prior to the first wave of COVID-19, BMRCL had a ridership of 4.24 lakh people and earned an average of ₹1.19 crore a day. In March 2021, its revenue dropped to ₹35.7 lakh with only 1.44 lakh citizens using Namma Metro services. Services resumed on Monday after restrictions were eased.