If booster shots are given on priority, the pace of vaccination may slow further.
In the worst case scenario, the country will take till mid-March to vaccinate its entire adult population partially.

Pfizer and BioNTech announced that initial lab studies showed that the third dose of the Covid vaccine neutralises the Omicron variant.

While the decision to administer the third dose in India still hangs in the balance, a few days ago, the Indian SARS-CoV-2 Genomics Consortium (INSACOG) in its weekly bulletin said that it had discussed administration of booster dose to those aged above 40.

An analysis of data suggests that the government would need an additional 430 million doses (assuming 6 per cent wastage) to administer booster shots — a third dose — to the population aged 40 and above (375 million) and healthcare and frontline workers (30 million).

The decision on additional doses would end up costing another Rs 9,675 crore (Rs 96.75 billion) to the government, assuming it negotiates a price of Rs 225 per dose.

The above calculation does not include the cost of delivery and administration of vaccines by the government.

In November, the government announced that its spending on vaccination might come to Rs 50,000 crore (Rs 500 billion) this fiscal year, up from the Rs 35,000 crore (Rs 350 billion) it had announced in the Budget. 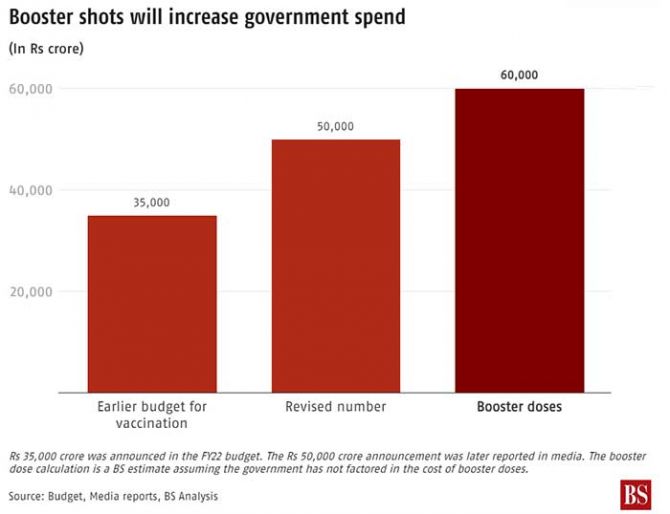 The pace of vaccination has declined in the last two months. Although there has been a pick-up in vaccination in the last fortnight, due to fears from the Omicron variant, India is still far from fully vaccinating its entire population.

The time to complete vaccination for the adult population is expected to get stretched out as the additional doses will need to be administered on priority.

An analysis by Business Standard found that on December 1, some of the larger states did not have enough doses to administer the partially vaccinated adult people with the second dose and the unvaccinated with the first dose. The country was short of 252 million doses.

Serum Institute of India has another 500 million doses in the pipeline, sufficient to vaccinate the entire population fully.

However, the government still needs to make additional purchases if booster doses are authorised.

Moreover, given the current pace, the country may not be able to partially vaccinate its adult population by the end of this month until it augments its capacity.

Of the total doses administered on Thursday, December 16, only 28 per cent, or 2.4 million doses, were first doses.

Given that the country still needs to vaccinate another 140 million people, it would take 58 days to vaccinate the entire population partially at the current pace.

The date may get pushed further beyond February 5, 2022, given the pace of first dose vaccination has been slowing down.

If the pace of daily first dose administration declines to 1.5 million, India would only be able to partially vaccinate its entire adult population by March 12, 2022.

The full vaccination would take another 120 days or four months, owing to the timeline required for the second dose administration. 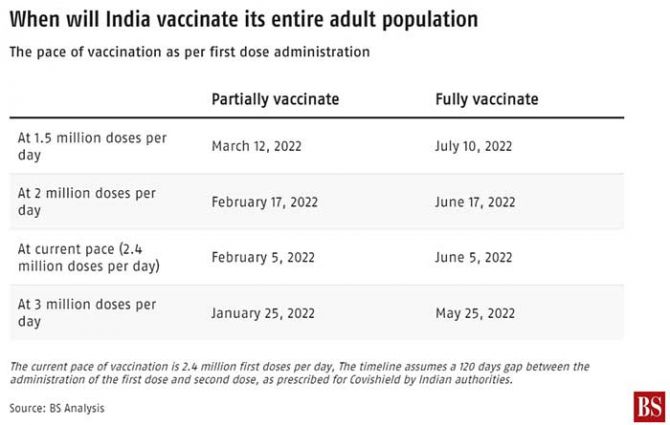