Just as the superstars of Indian cricket only play IPL and international fixtures and ignore the Ranji and Mushtaq Ali trophies in domestic cricket, Narendra Modi should play a very limited role in state assembly elections, argues Sudhir Bisht. 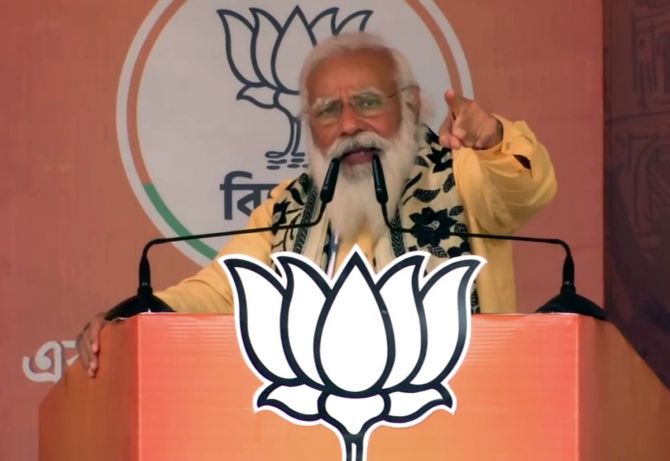 The Bharatiya Janata Party has won a silver medal in the Bengal khela. The gold medal has gone once again to the champion fighter of Indian politics, Mamata Banerjee.

To the uninitiated, khela means a game in Bengali and khela hobe means the game is on.

I learnt from an article by Deeptesh Sen of the Indian Express that the term khela hobe was first used by an Awami League politician, Shamim Osman, during an election in Bangladesh.

In India, a Trinamool Congress politician, Anubrata Mondal, was the first to use it during a local political event.

Khele hobe thus caught the imagination of Bengal and at the end of the game, the challenger team, the BJP, has managed to make a huge impression but that is a far cry from the ambitious target of defeating Didi, or elder sister, of Bengal.

Mamata Didi has won it in style even though she lost her own seat Nandigram. This is a definite embarrassment for Mamata Banerjee and some sort of a saving grace for the BJP.

How will this most bitterly fought election be remembered by students of political history?

Is it a massive defeat for the BJP as some would like us to believe?

Or should we look at the BJP seat tally of 77 as formidable growth?

Why did the BJP fall short of its target and what does it mean for the party? Let me offer a few points.

1. As a follower of Deendayal Upadhyay, the eternal optimist who was happy with incremental growth, I see the final tally as a huge gain for the BJP in Bengal.

A jump in seat numbers of nearly 25 times over the last assembly elections is a stupendous achievement. But when compared to the rather boastful pronouncement of ‘Abki baar 200 par (this time 200 plus)’, the number of seats the BJP won in Bengal is very low.

This dents the credibility of those who coined this slogan. I strongly believe that a team of non-Bengali leaders like Kailash Vijayvargiya were over-enthusiastic in projecting their gains in Bengal. Their credibility will take a hit after this.

2. The BJP could have won even more seats if they had at least one Bengali speaking leader in their Top 3.

Narendra Modi, Amit Shah and J P Nadda are all Hindi-speaking leaders. I don’t know why this point was lost on the BJP think-tank. Can one win Uttar Pradesh if the star pracharaks spoke Bengali?

It is a mystery to me as to why the BJP has not been able to build an acclaimed Bengali speaking leader till now. Bengal after all happens to be the home state of Dr Syama Prasad Mookerjee, the founder of the Jan Sangh.

The problem of not having big leaders who belong to a particular state is not limited to Bengal alone. The BJP doesn’t have big names in Punjab where it has always lived under the shadow of the Akali Dal.

With the latter now turning hostile, the BJP is struggling to find a prominent face among its Punjabi leaders who can be protected as the party’s local star pracharak in the assembly elections.

Perhaps a Navjot Sidhu could have fitted the bill, but he left the BJP after the late Arun Jaitley chose to fight the 2014 Lok Sabha election from his Amritsar constituency.

What about the states of Tamil Nadu, Telangana, Andhra Pradesh, Kerala, J&K? There are no big leaders who can be projected as local heroes in the assembly elections in these states as well.

No doubt the BJP’s biggest brand is Narendra Modi and he is projected as the ultimate leader of the BJP, but local leaders who are also hugely popular in the state occupy a huge importance in assembly elections.

You cannot go to state polls without at least one state leader who stands shoulder to shoulder with the national leaders.

3. The surge in COVID-19 also damaged the BJP’s chances. The urban voters turned up in low numbers during the second half of the long election. Though it is not right to blame the Union government alone for the surge in the second wave of COVID-19, the fact is that the impression among the general public that India as a nation was found napping when the second wave struck. And most people as of now blame the Union government.

This can change if India gets it act right but as of today, the Union government is blamed for the second Coronavirus surge. I disagree with this, but I and those who are on my side are in a minority right now.

4. Mamata Banerjee turned the election into a ‘Bengali versus non-Bengali’ contest.

This was a remarkable strategy and Mamata won hands down as she drove home the tag of outsiders on the BJP’s top campaigners.

Mamata also proved that she is way more popular in Bengal than the top 10 BJP leaders put together. This fact has to be acknowledged.

Another point that I want to mention is that the that BJP leaders launched a sustained attack on her and mocked her publicly. This I am sure proved counterproductive for the BJP.

5. The ‘Jai Shri Ram’ slogans didn’t cut much ice with Bengalis who are culturally different from North Indian Hindus. In Bengal it is customary to offer a bhog of fish to the Goddess on Dashami, the last day of Durga puja. Imagine a non-vegetarian dish being offered to a presiding deity in Varanasi! It would be an act of sacrilege.

The Hindus of Bengal are not the same as the Hindus of Uttar Pradesh. Their sensibilities are different and the land that gave birth to Brahmo Samaj does not get super excited about ‘Jai Shri Ram’ chants.

So the BJP’s positioning of its brand offering was faulty. The campaign was spirited, but the theme seemed to have missed the target.

It is, of course, easy to do a post-mortem of an election campaign, but that’s the beauty of democracy. Analysis of results is a no-brainer but the drawing up of a winning strategy is very, very tough.

Should the PM have campaigned so hard in Bengal?

Perhaps not. The PM has been overused by the BJP and it has taken a bit of sheen away from him. He is still respected, but no one can deny that the over-exposure has dulled the excitement factor from his persona.

Just as the superstars of Indian cricket only play IPL and international fixtures and ignore the Ranji and Mushtaq Ali trophies in domestic cricket, Narendra Modi should play a very limited role in state assembly elections.

The PM’s hallmark should not be embossed on every electoral battle.

But this is Narendra Modi. He is led to believe that unless he campaigns, the party will lose. And he is always happy to oblige. Narendra Modi seems to revel in electioneering.

I personally believe that he is diluting his marquee value. He should be used sparingly in state elections and his public rallies should be so rare that people should start craving for them.

Who would value gold if it were sold at Rs 1,000 per 20 gm? People cherish gold because its price is beyond the reach of the ordinary folk.

However, this may never happen. The BJP will not let its PM remain away from state elections.