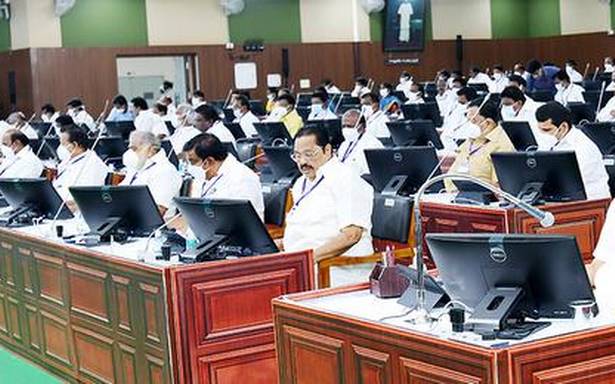 It lays out schemes for judicious use of water, solar-powered pumps

In its first exclusive budget for agriculture presented in the Tamil Nadu Assembly on Saturday, the DMK government announced a slew of schemes to boost Tamil Nadu’s agriculture profile over the next 10 years. Among them were schemes for judicious use of irrigation water, solar-powered pumps, and a scheme named after former Chief Minister M. Karunanidhi for overall agricultural development and self-sufficiency in villages.

Presenting the Budget on the day when the DMK completed 100 days in office, Agriculture Minister M.R.K. Panneerselvam said he dedicated the Budget to the farmers protesting in New Delhi against the three new farm laws. He said the inputs were taken from farmers when he visited Thanjavur, Tiruchi, Coimbatore, Krishnagiri and other areas on the advice of the Chief Minister.

A scheme for judicious use of water will be executed on an outlay of ₹982.48 crore with State funds and the Union government’s contribution. Under it, the government will identify small and marginal farmers who possess irrigation facilities and promote drip irrigation in a cluster approach to cover the increased area under cultivation, and enhance production. It is proposed to install micro-irrigation structures in 1.5 lakh hectares.

The government would implement a scheme called Kalaignarin Anaithu Grama Orunginaintha Velaan Valarchi Thittam in a span of five years to ensure overall agricultural development and self-sufficiency in all villages.

To be implemented on an outlay of ₹250 crore with State funds, the scheme will cover over 12,000 village panchayats. During 2021-22, it will be implemented in 2,500 village panchayats. Prior to the implementation of Chief Minister M.K. Stalin’s decision to bring 11.75 lakh hectares of fallow land into cultivation in the next 10 years, preliminary surveys have been carried out in 36 districts and 19.31 lakh hectares has been identified.

The government will implement the scheme to promote solar pumps to meet the increasing demand for electricity for well irrigation. On an outlay of ₹114.68 crore in State and Union government funds, off-grid-standalone solar-powered pumping system, 5,000 solar pumps, up to a capacity of 10 horsepower with 70% subsidy, will be installed during 2021-22.