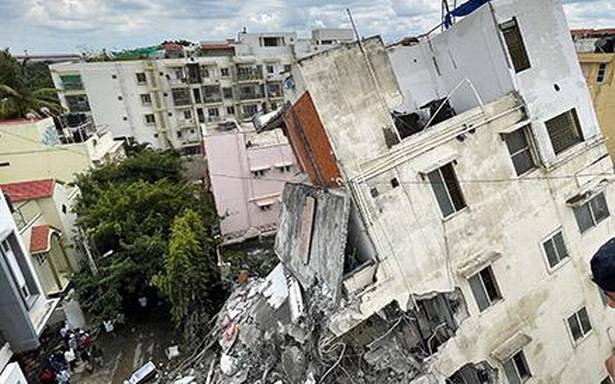 Probe reveals that the quality of construction was poor

The city police have arrested the couple who owned and built the multi-storeyed residential complex that collapsed in Kasturinagar on Thursday. The arrested property owners have been identified as Ayesha Beg and her husband Mirza Aksar Ali Beg.

They had started construction in 2012 and finished it in 2014. Deputy Police Commissioner (East) D. Sharanappa said that preliminary technical investigations revealed poor quality of construction to be one of the prime reasons for the collapse of the building.

Furthermore, the couple built the residential complex on a 40×60 feet site violating several norms. Bruhat Bengaluru Mahanagara Palike (BBMP) Chief Commissioner Gaurav Gupta, who visited the spot on Thursday, had told reporters that the building was constructed on a 40×60 site as a ground-plus-two floor house. However, they allegedly violated several norms and built additional floors than what had been permitted including a penthouse.

As of Friday evening, the demolition was still under way. The BBMP used gas cutters and helped residents retrieve valuable items that could be salvaged. The debris is yet to be cleared.

Assistant Engineer Shankarappa has been suspended after the BBMP found that the building had more floors than sanctioned.