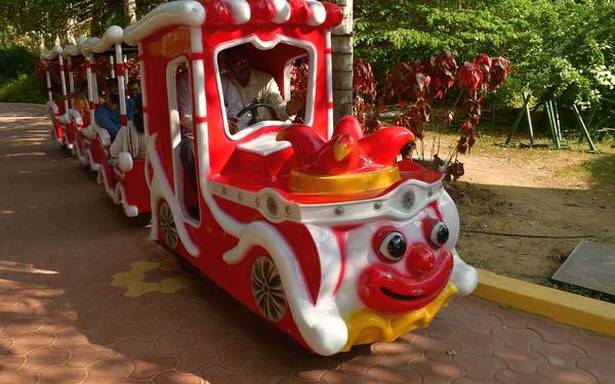 A battery-operated vehicle for children and adults and a toy train are among the latest amenities provided by the Forest Department at the Tropical Butterfly Conservatory in Srirangam which has been attracting a steady stream of visitors.

The facilities have been created with the partnership of a Tiruchi-based private agency with a view to attracting more visitors. The battery-operated vehicle with three cars can carry 10 adults and children a time. It will take them around the sprawling conservatory, stopping at different places such as Nakshatra Vanam. The tariff is different for for adults and children.

The toy train will be operated near the Children’s Park which will soon have a merry-go-round and new swing. The park is situated inside the 27-acre conservatory that is sandwiched between the Cauvery river and Coleroon river on a reserve forest area.

The conservatory remained shut for over seven months since the lockdown was clamped in March last year. It was reopened for visitors in mid-November last year by adhering to the standard operating procedure stipulated by the government. From mid-November to January-end, 30,000 people have visited the conservatory – over 13,000 in January alone.

Boards with information on the different families of butterflies have been put up inside the conservatory to educate the visitors. The lush green conservatory has been attracting different species of butterflies and birds. Officials said 125 butterfly species and 104 bird species have been recorded so far – the latest being Greater Spotted Eagle, a winter visitor that feeds on small mammals, frogs and snakes.