The city had recently witnessed three mega protest meetings against the new Citizenship Act(CAA), proposed NRC and the NPR with thousands marching holding the national flag. 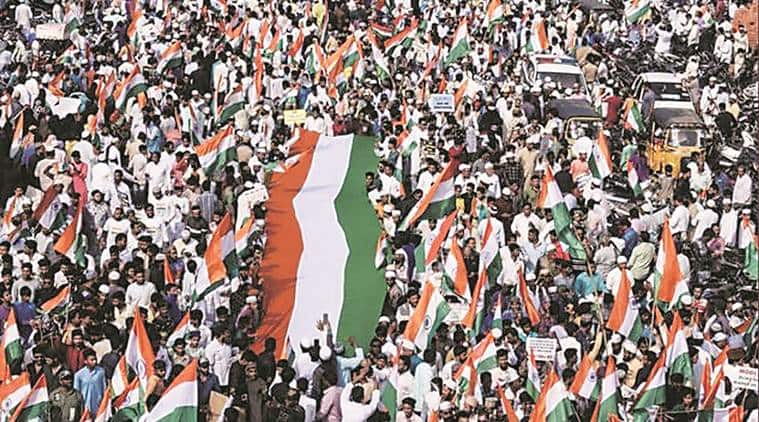 Amid nationwide protests against the amended Citizenship law and also in the state, Hyderabad is witnessing an unprecedented shortage of the Tricolour. With rallies being held frequently in Hyderabad, markets are running out of stocks. And with just 12 days left for Republic Day, the demand has only intensified.

Risala Abdullah New Osmangunj market in Hyderabad, which is the biggest wholesale market for stationery, paper products and decoration material in the city, has recorded an unprecedented sale of national flags in the last two months. With around 80 shops in the market, an estimated 1.8 lakh to 2 lakh flags of different sizes have been sold here since mid-December. Apart from retailers, individual customers have also been flocking to the market to buy flags.

“There is a shortage of flags in the last four days but stocks are coming in,” said Ashok Khatri of Bhagavan Card Centre which has been selling flags for the last 32 years. His shop has sold around 5,000 pieces which is more than double the usual sale. “The sale during Republic Day is usually lesser than that during Independence Day. We got our stocks as usual but because of the protest rallies, there is a huge demand and sale of flags,” he added.

Another wholesale dealer, Om Prakash of Ramdev decorations, said that there has been an increase of 20-30 percent in the sale of flags. “There is no shortage as such but when people ask for a large number of flags at a short notice, it becomes difficult. If orders are placed well in advance, there should not be any problem.” According to him, participants in protests often seek flags in sizes which are not manufactured. “Our biggest sized flag is 4×6feet. People ask for 10x12feet and 8x10feet flags. Such sizes are usually not manufactured and they think there is a shortage of flags,” he added.

Acknowledging that the sale of flags this season has been better than expected, Rohit Khatri of Ambe decorations, pointed out that flag making is a labor-intensive job. “After stitching cloths into a flag the Ashok chakra has to be printed and dried before it could be folded and transported. That takes some time,” he said. According to him, wholesalers get their stocks of flags and other materials like metal badges, pin badges, caps, shawls, hand, and headbands, straw flags, thermacol balls, t-shirts, garlands, thermacol boards, etc for sale during Independence Day and the Republic Day. “The sale of flags has increased due to a couple of rallies. Other materials are sought only for celebrations at schools, colonies, political party offices, etc during Republic day,” he said.

Flags come in five different sizes and are sold for anything between Rs 25 and Rs 200 per piece in the wholesale market. “There are only three to four manufacturers in Hyderabad and another two-three in Warangal. There would not be any flags available after January 26,” said Deepak, at Paramount papers.

On December 22, a mega protest meeting was held by AIMIM chief and Hyderabad MP Asaduddin Owaisi at his party headquarter Darussalam. On January 4, another rally and protest meeting, ‘Million March”, organized by the Telangana and Andhra Pradesh Joint Action Committee brought the city to a standstill. Similarly, a ‘Tiranga Rally’ organized by Asad Owaisi-led-United Muslim Action Committee on January 10 saw the participation of a couple of lakh people. Several flash protests on the city streets have also become commonplace. Rallies in support of CAA are also being taken out. And what was common in all these peaceful protests is large numbers of national flags.

Earlier in December, Owaisi had appealed the public to hoist the national flag atop their houses and participate in anti-CAA protests holding the national flags. With municipal elections around the corner, he has been holding several public meetings across the state and also asking supporters to carry the national flags.