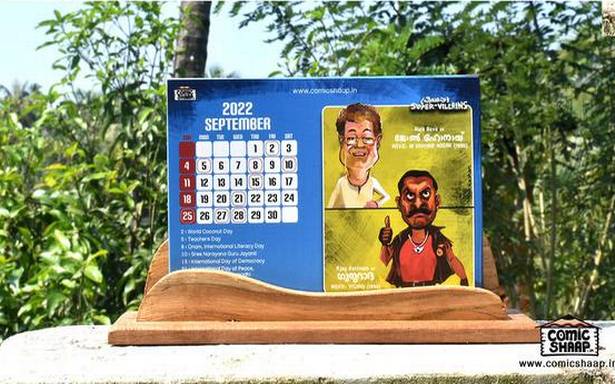 It is time to turn a new leaf. After struggling with the pandemic, it is time to move on. Those designing calendars that go beyond pictures of gods, landscapes and cute photos are surprised by the demand for desk calendars with a difference. Calendar girls and guys with toned bodies have given way to legendary villains from Malayalam cinema, famous authors in the language, art forms of Kerala, story-telling traditions and so on. From artists and architects to self-taught artists and photographers are designing calendars with a difference.

Of villains and politics

Artist Vishnu Madhav a.k.a Pencilashan has designed two thematic calendars. One, called ‘Priyapetta Super Villains in Malayalam Cinema’, brings alive immortal negative characters from the seventies onwards. Starting with caricatures of Mammootty’s Bhaskara Patelar (Vidheyan) and Mohanlal’s Narendran (Manjil Virinja Pookal), there are caricatures of Philomina’s Anappara Achamma (Godfather), Babu Antony as ‘gangleader’ (Douthyam), Kottarakkara Sreedharan Nair as the sorcerer in My Dear Kuttichathan, KPAC Lalitha’s Malavika (Aadyathe Kanmani), Rizabawa’s John Honayi (In Harihar Nagar) and so on. Two characters have been illustrated on each leaf of the calendar, which has the name of the character, the movie, the actor and the year of the film’s release.

“Since most of the cartoons on my Instagram page are based on politics, the second theme is political satire. That is called ‘The Great Indian Boasting (Thallu), I was There’ calendar. It is about the tall, far-fetched claims made by political leaders,” says Vishnu.

He has based each month on important historic events. March shows the Dandi March. When Mahatma Gandhi reaches the sea shore, the leader is already there sucking on a salt crystal. May has Edmund Hillary and Tenzing Norgay climbing Mount Everest. When they are about to reach the peak, the leader is there at the top to lend them a helping hand. Skipping centuries and countries, he is there during important historic moments. Another one shows the leader working hard on building the pyramids in Egypt while yet another month shows him posing for a statue in Harappa.

National holidays and days dedicated to important events have been highlighted at the bottom of each leaf. The calendars are available at www.comicshaap.in.

For Rajisha K Rajan, drawing was a hobby that she used to indulge in occasionally. During the lockdown in March 2020, she began working from home and that was when she started drawing portraits. As her portraits were widely appreciated, the former techie from Technopark in Thiruvananthapuram designed a calendar last year that was in tune with Malayalam film music.

As she was working from her home in Kannur, she had time to polish her sketches. The calendar included her favourite singers as well as greats like KJ Yesudas, V Dakshinamoorthy and P Bhaskaran. “Called ‘Paattu Chembakangal’ (musical blooms), each page had a portrait of a musician and a few lines of a popular song that he/she had rendered, composed or scored. I was on a high when musicians like KS Chithra, Bijibal, Nithya Mammen and Sithara Krishnakumar shared it on their Facebook pages,” recalls Rajisha, now a resident of Simla, Himachal Pradesh.

As the calendars were sold out even though she could put them for sale only in January, this year she completed a calendar called ‘Akshara Nakshatrangal’ (literary stars) that celebrates Malayalam authors. Beginning with KR Meera’s sketch in January, she goes on to draw portraits of Benyamin, Sara Joseph, VJ James, Priya AS, E Santhosh Kumar and S Hareesh.

“It was a friend who asked me if I could do one on authors. That is how this calendar was created. Now, I have become a full-time artist. Simla is the best place for that!” After the authors shared it on their Facebook and Instagram pages, Rajisha has been getting several calls for her calendars. The self-taught artist can be contacted at 7249946356.

Architect Indu Sathyendran’s desktop calendar pictures major performing arts that are unique to Kerala such as Kathakali, Koodiyattam, Ottanthullal, Mohiniyattam, Pulikali, Theyyam and so on. “It is called ‘Kerala Kala’ (Kerala’s art). The calendar’s cover has a one-line description of the art form,” says Indu. Each picture was drawn and painted by Indu before it was given for printing. Email [email protected] or message on Instagram (@quirkyi) or Facebook.

In the case of shutterbug Dilip Nair, it was his desire for an eco-friendly calendar that could be recycled that motivated him to design table calendars that can double up as postcards. “I used to feel sorry about the pages that would be discarded as soon as the month or year was up. That is how I came up with my calendar that can be used as postcards as well,” he says.

Minimalism is the theme of his calendar. Beautifully composed photographs clicked by him mainly in Kerala form one half of each leaf while the other has a blank space with the calendar beneath it. “Once that month is over, you can tear away the calendar along the dotted lines and it becomes a postcard,” says Dilip.

Meanwhile, a calendar of the Palakkad chapter of the Indian National Trust for Art and Cultural Heritage (INTACH) highlights how the culturally rich district has influenced 12 great authors such as MT Vasudevan Nair, OV Vijayan, Anita Nair, Mundoor Krishnankutty, Shashi Tharoor, VKN, Malayattoor Ramakrishnan and so on. “It’s called ‘Palakkad: Granary of Tales’ and talks of Palakkad’s story-telling tradition in literature… how Palakkad has inspired the works of writers, and how the imaginations of writers inform the way we understand the place.

“The calendar will feature 12 works of fiction through illustrations, small blocks of excerpted text from the work and an image of the writer,” says Arun Narayanan, convener of the chapter. The calendars can be availed of from the INTACH Palakkad chapter.