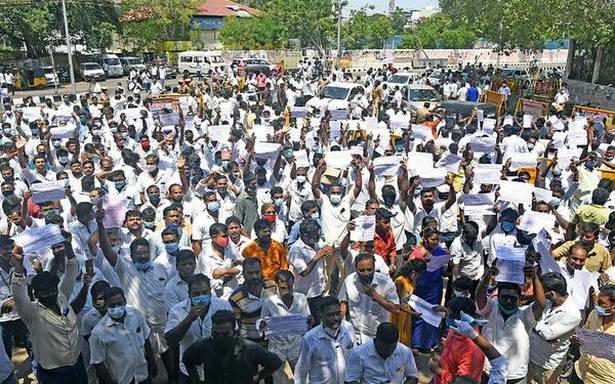 They demand tariff hike and cut in cab aggregators’ share

A section of Ola and Uber drivers on Friday resorted to a flash strike, demanding a revision of tariff in view of the rising fuel prices in the city. On Friday, office-bearers of call-taxi drivers’ associations met a Joint Commissioner-level official in the Transport Department at Chepauk and put forth demands, including a tariff hike and a reduction in the share of cab aggregators.

Tamil Nadu Call Taxi Drivers’ and Owners’ Association general secretary P.R. Samy said, “We told the officials that the rates for cab services were not revised for the last five years. In view of the fact that fuel prices have touched a historic high now, we want the authorities and the cab aggregators to revise the tariff rates accordingly and cap the commission for aggregators. The officials promised to hold talks with the cab aggregators.”

As they were about to leave, over 500 drivers and car owners, who had gathered on Wallajah Road, resorted to a protest, reiterating the demands. The office-bearers apprised them of the progress of the talks they had with the officials. As the protesters continued their stir without permission, the police attempted to remove them by arresting them. However, they dispersed on their own.

Then, over 200 of them parked their vehicles near the LIC building, blocking vehicular traffic on the arterial Anna Salai, and resorted to a flash protest.

Top police officers reached the spot and asked them to disperse immediately. Jude Mathew, of the Tamil Nadu Independent Rental Vehicle Owners’ and Drivers’ Association, said it was a spontaneous protest.

The police enhanced vigil as the drivers were planning to hold similar protests in other parts of the city.

Vinodh Kumar, a call-taxi driver, said, “The tariff for cab services was fixed five years ago; the price of diesel was between ₹65-₹70 a litre then. We received ₹9 per km and the cab aggregators got 30% commission. Now, the fuel prices have reached a historic high, and the tariff rates have not been revised in line with the prevailing rate. We are suffering a lot because of the fuel price hike and the attitude of the cab aggregators.”

The association’s members want the government to fix rates for cab services and reduce the share of Ola and Uber to 5%.