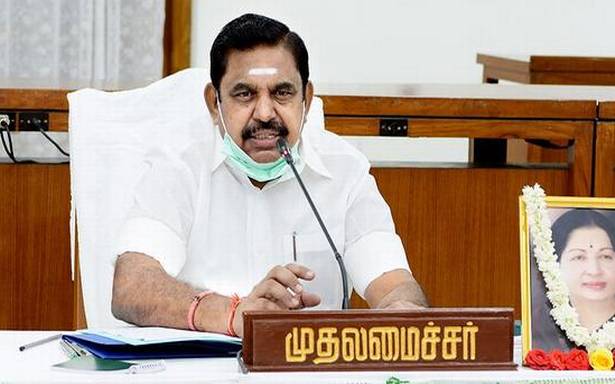 The Chief Minister reasoned that there was a need to ensure adequate oxygen availability in Tamil Nadu due to the active caseload crossing over a lakh.

Tamil Nadu Chief Minister Edappadi K. Palaniswami has written to Prime Minister Narendra Modi seeking immediate cancellation of the diversion of 80 KL of liquid oxygen from Sriperumbudur to Andhra Pradesh and Telangana. He reasoned that there was a need to ensure adequate oxygen availability in the State due to the active caseload crossing over a lakh.

In his letter, Mr. Palaniswami said that in the latest National Medical Oxygen allotment, the oxygen allocation for Tamil Nadu has been fixed at 220 Metric Tonnes (MTs), while the State would require 450 MTs shortly, which would be more than the production capacity of 400 MTs.

“Based on this wrong allotment [of 220 MTs], 80 MTs of liquid oxygen has been diverted from the manufacturing facilities located at Sriperumbudur, Tamil Nadu, to Andhra Pradesh and Telangana. This is based on the wrong position that the existing oxygen consumption in Tamil Nadu is lower than the manufacturing capacity,” he said.

The Chief Minister said according to the Petroleum and Explosives Safety Organisations data, the consumption of oxygen in Tamil Nadu has already reached 310 MTs as against the inadequate allotment of 220 MTs.

“Also, the States to which the allotment has been made have lower number of active cases than us and also have major steel industries located within the their State/close to their States. Hence, the diversion from the Sriperumbudur plant which supplies to Chennai city with the second biggest caseload in South India seems to have no justification. This needs to be immediately corrected,” Mr. Palaniswami said.

He further said that while Tamil Nadu had never imposed any restrictions so far and was always ready to support other States, “such mandatory diversion of liquid oxygen from the needs of our State can lead to major crisis in Chennai and other districts” and requested the Prime Minister to immediately cancel the diversion of 80KL from the Sriperumbudur plant.