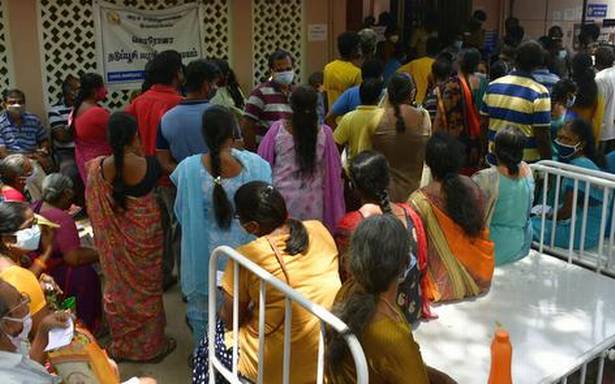 The number of COVID-19 cases recorded a dip in the central region on Friday but the number of deaths recorded a significant increase. While 3,865 patients tested positive for the virus, while 77 patients succumbed to the illness.

Perambalur disrict reported the highest number of deaths with 22 patients succumbing to the viral infection. Tiruchi reported 15 and Nagapattinam 13. Karur reported eight deaths and Pudukottai seven. Ariyalur and Tiruvarur districts reported five deaths each, while two patients succumbed to the illness in Thanjavur.

Thanjavur reported the highest number of COVID-19 cases with 1,004 patients testing positive. Tiruchi district reported a significant dip in the number of fresh cases with 689 persons testing positive. Meanwhile, 798 patients who had been undergoing treatment for COVID-19 at the Tiruchi Mahatma Gandhi Memorial Government Hospital were discharged after recovering from the viral infection on Friday.

Tiurvarur reported 576 fresh cases, while similar declining trends were also reported in Nagapattinam, with 516 fresh cases, according to data published in the COVID-19 bulletin released by the Department of Medical and Family Welfare

Karur district reported a slight dip in cases with 337 patients reporting COVID-19 positive. Karur had one of the least numbers of vacancies of ICU and oxygen-support beds with only six ICU beds being vacant on Friday.

Pudukottai reported 288 fresh cases, Ariyalur, 246 and Perambalur, 209. Bed vacancy in these districts too was minimal. Pudukottai had only six vacant ICU beds, Perambalur had seven and Ariyalur none.