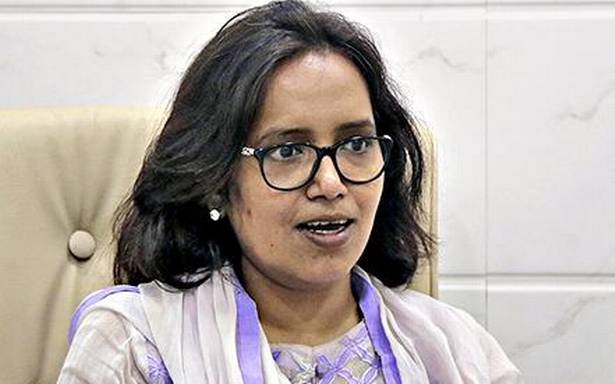 Providing a safe environment to students was the top priority for the Maharashtra government, State Education Minister Varsha Gaikwad said on Sunday.

Ms. Gaikwad, along with other State Education ministers, participated in a high-level meeting with Union Education Minister Ramesh Pokhriyal Nishank to discuss the conduct of CBSE Class XII exams amid speculation of a possible third wave of COVID-19.

During the meeting, Ms. Gaikwad said that the option of a non-examination route for Class XII students must be actively considered in view of the grim pandemic situation and the possibility of children being vulnerable to new virus strains.

She also said that Chief Minister Uddhav Thackeray would be chairing a meeting in the next two days to take a final decision on the conduct of the Class X and Class XII Board exams.

“The health and mental well-being of students is our first priority. Students and parents have been sharing their concerns regarding sitting for exams in the midst of the pandemic…students have been studying in an atmosphere of uncertainty for the last 14 months now. In the interest of students, we must take a decision to end this uncertainty,” Ms. Gaikwad said.

Regarding the mode of evaluation, the minister said that a retrospective assessment model could be considered to decide on the students.

Ms. Gaikwad further said in the meeting that the focus of all State governments must be on evolving a uniform assessment policy, while prioritising vaccinations of teachers and students before the resumption of schools and colleges in the next academic year.

She expressed regret that the CBSE had not met at all during the pandemic year while pressing the need for more such meetings.

“For CBSE schools, the Centre has sought feedback from States on two options on conduct of exams. While I have given my initial feedback, I have also conveyed to them that I would be holding further deliberations with the Chief Minister regarding the conduct of both CBSE and State Board exams in Maharashtra,” Ms. Gaikwad said.

The Bombay High Court had recently slammed the State government for scrapping the Class X Board exams.

Responding to that, Ms. Gaikwad said that the State government would apprise the High Court of the potential threat to students in the event of a third wave.