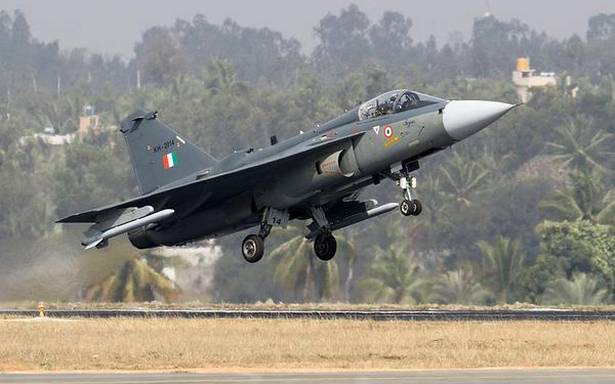 The MK-1A will have over 40 modifications over the MK1 variant including a new Electronic Warfare system and Advanced Electronically Scanning Array radar.

In the biggest indigenous defence deals, the Cabinet Committee on Security which met on Monday approved the procurement of 83 Light Combat Aircraft (LCA) MK-1A for the Indian Air Force (IAF). The aircraft will be manufactured by Hindustan Aeronautics Limited (HAL).

“The CCS chaired by Prime Minister Narendra Modi today approved the largest indigenous defence procurement deal worth about ₹48,000 crore to strengthen IAF’s fleet of homegrown fighter jet LCA-Tejas,” Defence Minister Rajnath Singh said in a tweet. This deal will be a game changer for self reliance in the Indian defence manufacturing, he stated.

The indigenous content of LCA-Tejas is 50% in MK-1A variant which will be enhanced to 60%, Mr. Singh said.

The MK-1A will have over 40 modifications over the MK1 variant including some major ones like a new Electronic Warfare system, Advanced Electronically Scanning Array (AESA) radar, Beyond Visual Range (BVR) missiles and network warfare system including Software Defined Radio (SDR), a defence official stated.

The modifications have been tested and will be put in the LCA concurrently along with the production once the deal is signed.

For the MK-1A, HAL is outsourcing significant workshare to the private industry while it will act as a ‘system of systems integrator’. The HAL has has over 550 vendors for the LCA which includes five companies manufacturing the structures.

The Indian Air Force (IAF) has ordered 40 LCA Tejas in two batches of 20 each in the Initial Operational Clearance (IOC) and Final Operational Clearance (FOC) configurations and has raised two squadrons. Till date, 16 aircraft have been delivered to IAF in IOC configuration which form the first squadron operationalised in July 2016. Delivery of FOC aircraft has also commenced with improved weapons capability, enhanced fight envelope, inflight refuelling capability and advance features for low speed handling.

The 40 jets also include eight trainer variant of LCA which are scheduled to be delivered from 2023 onwards.

In a recent conversation with The Hindu, IAF Chief Air Chief Marshal RKS Bhadhauria had termed the deal a ‘high priority’. Last May, the IAF formally inducted into service the first FOC standard LCA and operationalised its second LCA squadron N0. 18 ‘Flying Bullets’.

The deal once signed will take the order book for LCA Tejas to 123. There is also a LCA MK-2 under development.